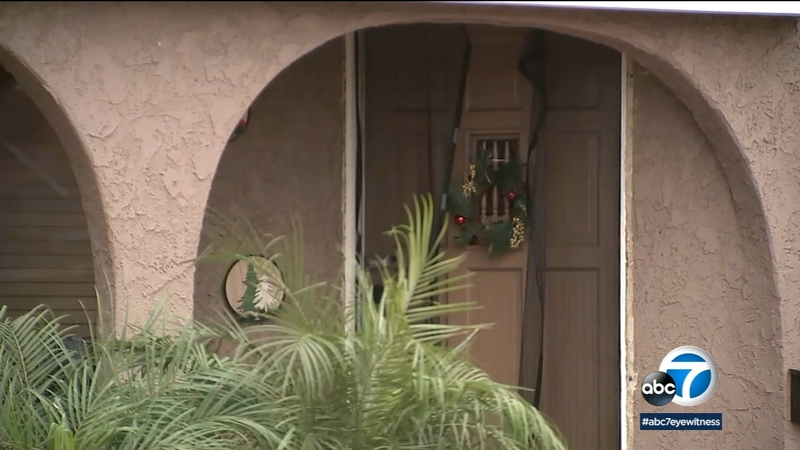 BELLFLOWER, Calif. (KABC) -- Would-be robbers ransacked a house in Bellflower and assaulted a man and woman Friday evening after they arrived home to find the thieves still on the property, the residents and authorities said.

The incident was reported after 10 p.m., according to the Los Angeles County Sheriff's Department.

Four people, including a child, returned home from a movie theater and called 911 after discovering two suspects burglarizing the residence, investigators said.

One of the victims, Patricia Heredia, said one of the assailants struck her in the face.

"When I went through the driveway to see if the owner was here, he was wrestling with one of them," Heredia said. "But because I was covering the door so he could get out, he punched me so I could get out of the way. So that's why I have a little swell in my face.

The man who owns the property, which includes a house near the street and a smaller home at the end of the driveway, said his injuries were treated at a hospital.

After Los Angeles police arrested 14 suspects in a series of smash-and-grab robberies, all of them are free pending trial under zero-bail policies.

The homeowner, who declined to be publicly identified, showed ABC7 the stiches he received after one of the assailants bit his arm. The victim's denim jeans were still splattered with blood.

Heredia said her young 5-year-old daughter was present during the harrowing encounter.

"I had my baby with me," she said. "She witnessed it, pretty much. And I had to put her back in the car for her safety, locked it and went to the back."

The intruders fled the scene and remained at large Saturday. Detailed descriptions of the suspects were not available.

The would-be thieves tried to make off with a safe but dropped it while attempting to climb over a cement wall, one of the residents said.