Toddler bitten by tick falls into coma: 'We couldn't get him to do anything' 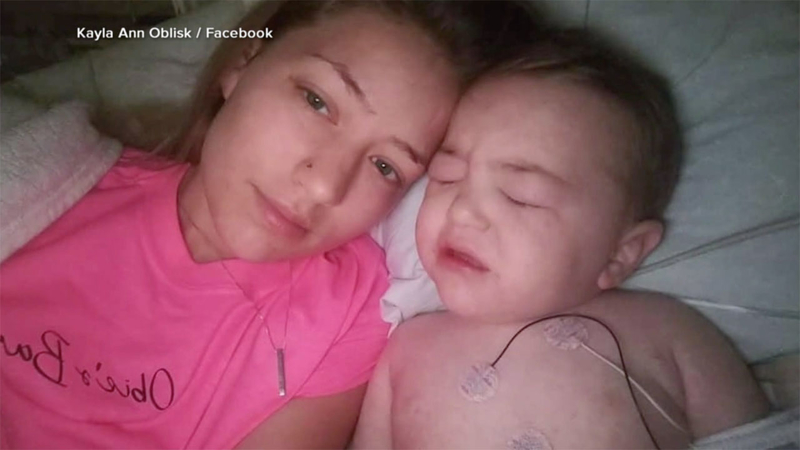 Toddler bitten by tick unconscious for nearly a week

LOUISVILLE, Ky. -- A Kentucky mother is warning parents to be aware of ticks this summer after her toddler was left unconscious for nearly a week because of a potentially dangerous disease carried by ticks.

"We couldn't get him to do anything. If you touched him, he screamed," Kayla Oblisk said of her 2-year-old son Jackson. "My kid wouldn't get up. He wouldn't eat. He wouldn't drink."

Oblisk did not initially think the bite was a big deal until Jackson developed a fever that reached 105 degrees. He had contracted a rare disease called Rocky Mountain spotted fever and eventually fell into a coma.

"I'd learned that you usually see death on day eight. It's when organs start to fail," Oblisk said. "When we got him to the hospital, it was day seven."

According to the Centers for Disease Control, Rocky Mountain spotted fever is a bacterial disease spread through the bite of an infected tick. Symptoms include fever, rash and headache, and it can be deadly if not treated by antibiotics.

Ticks can cause other diseases as well. Each year, about 30,000 cases of Lyme disease are reported to CDC by state health departments and the District of Columbia. But studies suggest the actual number of that the number of people diagnosed with Lyme disease each year in the United States is around 300,000.

Experts warn that ticks are most active in warm months from April to September.

To keep your family safe, check for ticks as soon as you come indoors. Wear clothing with built-in tick repellent, use tick-repellent sprays and shower within two hours of leaving an outdoor area to wash away any unattached ticks.

Jessica Griffin took to Facebook to share her daughter's harrowing experience with tick paralysis, which left the young girl with difficulty walking and talking.