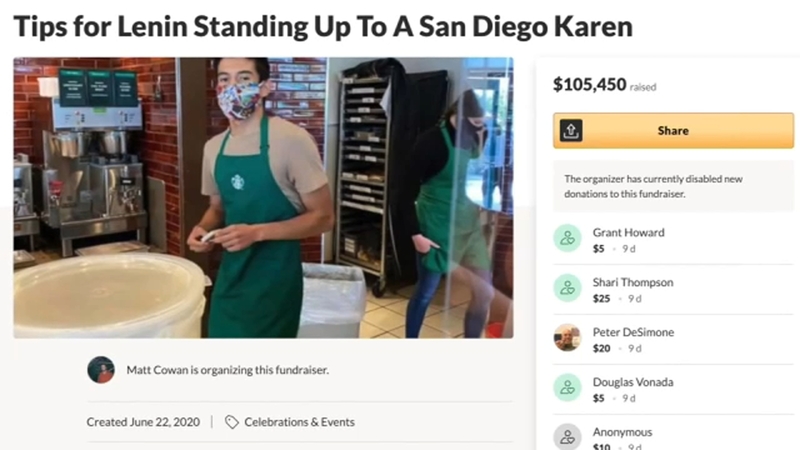 SAN DIEGO (KABC) -- A woman has filed a lawsuit against an Orange County man who created a GoFundMe campaign that raised tens of thousands of dollars for a Starbucks barista who refused to serve her because she wasn't wearing a mask.

Last year, Amber Lynn Gilles posted a picture of the barista, Lenin Guitierrez, on Facebook and accused him of discrimination for refusing to serve her at the San Diego Starbucks.

"Meet lenen from Starbucks who refused to serve me cause I'm not wearing a mask. Next time I will wait for cops and bring a medical exemption," Gilles' post read.

Matt Cowan saw the post, felt bad for Lenin and set up a GoFundMe page for him, which ended up generating more than $100,000 in donations for the young barista.

A woman says she is entitled to half of the $100,000 donated to a Starbucks barista in San Diego who refused to serve her because she wasn't wearing a mask.

It's that GoFundMe page which is at the center of a new lawsuit filed by Gilles against Cowan and his company, alleging he used her pictures to make a profit.

"There is an invasion of privacy aspect here as well and it's defamatory and money was raised by him," said Michael Harrington, Gilles' attorney.

Cowan said everything was done in a "philanthropic sense," adding that he used publicly available information to set up the GoFundMe page.

The suit alleges that Gilles received death threats. Now, she wants a trial and money for lost work, damages and lawyer fees.