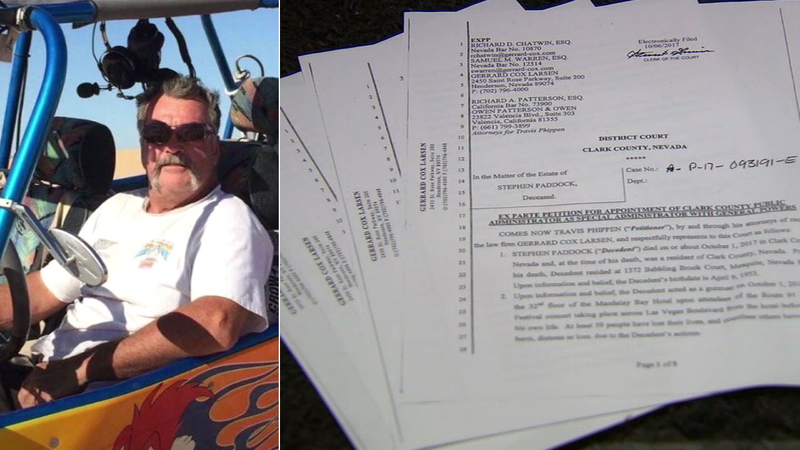 SANTA CLARITA, Calif. (KABC) -- A Santa Clarita family whose father died in the Las Vegas shooting is taking legal action against the gunman and his large estate to protect the other 57 people killed in the attack.

The gunman, identified as 64-year-old Stephen Paddock, opened fire during the Route 91 Harvest Festival while he was on the 32nd floor of the Mandalay Bay hotel. Not only did he kill 58 people, he injured nearly 500 others.

"We have filed a petition with the district court in Nevada, requesting that the court appoint a public administrator of the state of Nevada to take control of his assets," Attorney Richard Patterson said.

The lawsuit aims to freeze Paddock's assets and block his girlfriend Marilou Danley and his brother from moving any money as heirs.

"It is for the benefit of everyone. It will preserve the assets subject to the court's direction and future distribution," he said.

John Phippen, a father of six, was fatally shot in the back after jumping on a young woman to shield her from the gunfire. His son, who was with him, was shot in the arm.

The 56-year-old was described as kind and generous, and his family wanted to continue that legacy by taking legal action. They want to make sure a horrific tragedy like this never happens again.

"Objecting this to make change happen. To make these concerts, make the hotels more responsible and diligent in preventing these sorts of things," Patterson said.