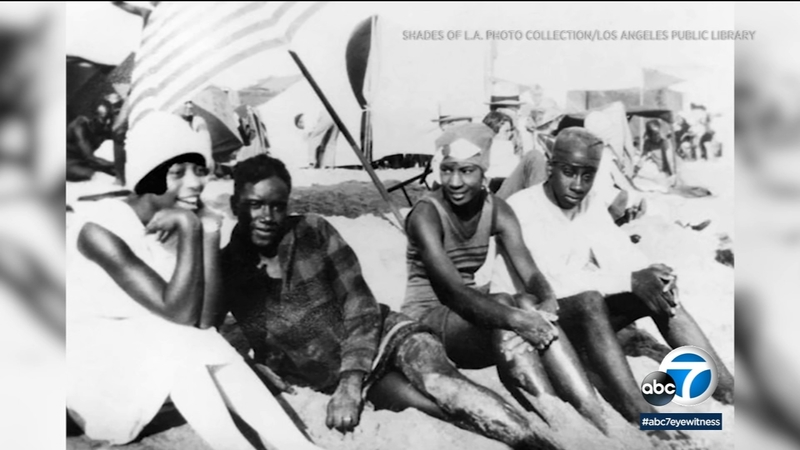 SANTA MONICA, Calif. (KABC) -- For more than 50 years, Santa Monica's Belmar Triangle was a thriving African American community, until homes and businesses were seized under eminent domain to make way for the civic center and auditorium.

The Santa Monica sun still shines on Phillips Chapel Christian Methodist Episcopal Church at 4th and Bay Streets. It was the first African American church in the beach city.

"We're reinserting the stories of the people and the places and the events of African Americans who lived in this neighborhood," Jefferson said.

She tells us how from La Bonita, the earliest bathhouse, to the never-opened Ebony Beach Club, African American beachgoers were segregated, despite laws here prohibiting discrimination.

A visitor can learn this history and more in an outdoor exhibit that has just been completed at Historic Belmar Park at 4th and Pico on a half-mile walk past 16 panels that tell of an African American history nearly erased.

It's where the city of Santa Monica turned a parking lot into sports fields, and dedicated the perimeter to this project.

"I want people to realize that there was this African American community here and I want them to realize the loss," said Jefferson, who added, "I also want them to recognize and remember the resilience of this community as well from the stories about the lives of the people who are represented in this exhibit."

From a distance, artist April Banks' work looks like the form of an original home. Come closer, it's broken into pieces.

"So, there's four parts of the house," she said, naming the piece "The Resurrection in Four Stanzas."

At the heart of the piece is a time capsule, a collective memory project.

"This is a resurrection of the Black history of Santa Monica, and specifically, this neighborhood is where we focus for the commemoration of history."

Jefferson added, "Walking around this exhibit, folks will learn about this almost-erased African American neighborhood."