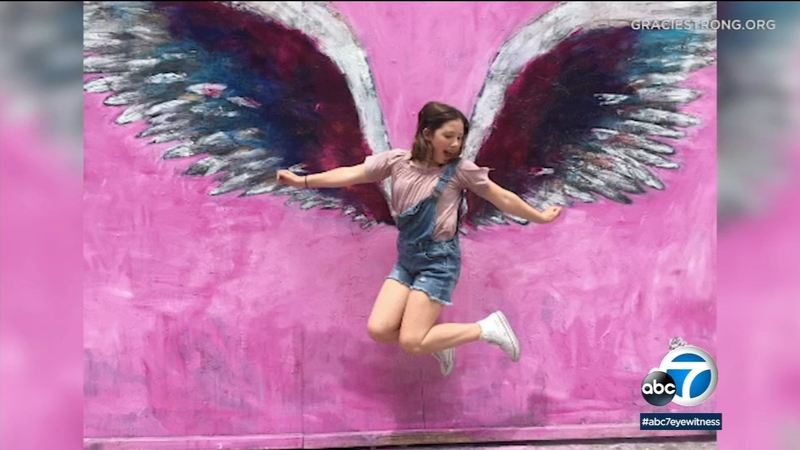 SAUGUS, Calif. (KABC) -- A startling photo of 15-year-old Gracie Muelhberger has inspired a campaign to help troubled teens before they resort to the type of violence that claimed her life.

Muelhberger and 14-year old Dominc Blackwell were gunned down a year ago in the quad of Saugus High School by a 16-year old who injured six others before taking his own life on his birthday, Nov. 14 last year.

Gracie's father was gripped when he saw the picture taken by Gracie's girlfriends months earlier on an outing to West Hollywood.

A community came together to grieve, mourn and honor Gracie Muehlberger, one of the students killed in the Saugus High School shooting.

The background was part of the Global Wings Project. Gracie, jumping, was suspended in the air with wall-sized wings on either side of her.

"It was a month or so after the tragedy and one of Gracie's friends brought us a gift - a series of photos of all these selfies in front of these angel wings. She looks like the wings are on her back and she's flying," said her father, Bryan Muehlberger.

The wings are a creation of Colette Miller, who has transformed walls around the world.

When the Muehlbergers told her about their daughter and the photo captured in West Hollywood, Miller welcomed the opportunity to install her iconic wings on the campus of Saugus High.

She says the wings are more than a photo opportunity. They are a call for self-examination to inspire divine action.

"To me that humanity can be reminded of our higher natures and that we can be the angels of this earth," says Miller.

The image of Gracie between the giant wings emblazons a new foundation and website, Graciestrong.org/ and on Instagram.

The campaign's aim is to raise awareness about teen mental health and the need to communicate about the dark world that many teens live in but don't talk about.

"I think if someone would have just went up to the murderer and said something to him - it was his birthday - 'Happy Birthday,' it would have stopped the situation. That's our honest feeling," said Bryan Muehlberger.

The motto of the campaign is "Speak Up, Be Heard." Muelhberger says mental health should be part of the high school curriculum to protect innocent students and those tortured by suicidal thoughts.