After pair of SoCal earthquakes, how did new ShakeAlert app perform?

After earthquakes in the San Gabriel Valley and Lake Elsinore, experts with ShakeAlert say the apps performed as expected to warn people to expect shaking.
KABC
By Tony Cabrera 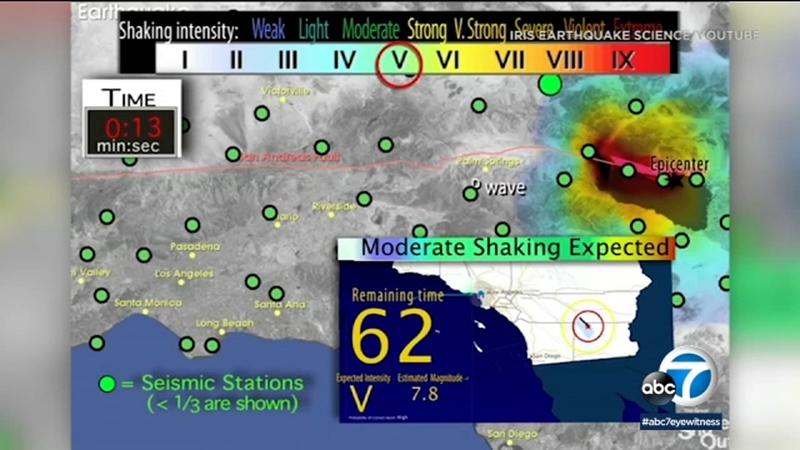 After SoCal quakes, how did ShakeAlert app perform?

ANAHEIM, Calif. (KABC) -- Southern Californians have felt a few small earthquakes in recent days, including a 4.5 magnitude in the San Gabriel Valley Friday and a 3.4 near Lake Elsinore Monday morning.

So how did the new Shake Alert app perform? The app was released last year to give an alert when an earthquake of a certain size hits, so that people on the out perimeters will be warned to expect shaking.

Just before midnight a 4.5 magnitude earthquake occurred in the Los Angeles Area. @MyShakeApp sent an alert to 20,000 phones! Be prepared with the #MyShake mobile app! Designed to send users alerts ASAP so they can drop, cover and hold on. download here: https://t.co/9zF3qAPeTh pic.twitter.com/bmfl8YBQXP

Scientists behind the ShakeAlert technology say their early warning system performed really well during Friday night's earthquake in the San Gabriel Valley that was felt across Southern California.

Angela Chung, a project scientist with the Berkeley Seismology Lab, says the app worked as expected.

"With this earthquake, it really did a great job of doing all the things that it was supposed to do," Chung said.

RELATED: How to make your own earthquake preparedness kit
EMBED More News Videos

Chung says it's not about predicting an earthquake, but letting people know quickly than one has started and they should expect shaking.

"We had the first alert go out in 4.7 seconds, which is really fast," Chung said, referring to Friday. "That's really great. That means from the time that the earthquake started to where we detected it and then created the alert, which is then sent out to everybody who is receiving alerts like the cell phone apps, that was 4.7 seconds."

MyShake, QuakeAlertUSA and ShakeAlertLA are third-party apps that deliver the data, along with Android devices.

Some people say they didn't receive an alert, while others got alerts right as it was happening, or a couple of seconds prior to feeling the shaking.

Chung says alerts and timing depend on how close you are to the epicenter. Those closest to the quake will feel it first, likely before the app has a chance to detect the shaking and send out the warning.

"If you're right on top of that earthquake, you won't get a warning. That's one of the drawbacks of earthquake early warning. We have to detect it with our sensors to let you know that there's an earthquake coming."

Since there are smaller earthquakes that happen every day, there are certain thresholds that need to be met before an alert is sent out, which had to be adjusted after the Ridgecrest earthquakes last year.

"We can't make everyone happy, but we're doing our best to make reasonable thresholds we think will make most people happy and feel safe and confident in our product," she said.

Customized alerts are in the works for the different apps, so users will have more control of what they're alerted about and when.