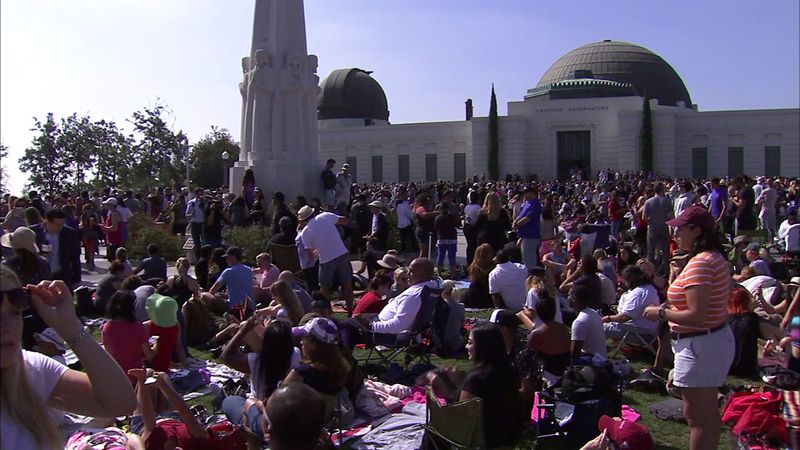 GRIFFITH PARK, LOS ANGELES (KABC) -- All eyes were on the sky for the Great American Eclipse on Monday, and crowds of thousands in Southern California gathered at the Griffith Observatory for the event.

The stellar sighting was the first coast-to-coast total eclipse in nearly a century. The last solar eclipse visible in the sky was in 1979.

Total solar eclipse 2017: Everything you need to know

People in what's called the "pathway of totality" -- a narrow corridor stretching from Oregon to South Carolina -- saw the moon completely cover the sun.

The first total solar eclipse to sweep the entire U.S. in 99 years happened on Monday, and a prime viewing spot was near Madres, Oregon.

The rest of the nation saw a partial eclipse, with roughly 60 percent of the sun being blocked by the moon.

MORE: How to photograph the total solar eclipse with a smartphone

Hundreds gathered at viewing parties across Southern California, most notably at the observatory, but also at the Los Angeles State Historic Park, city and county libraries, Caltech, UCLA, USC and the California Science Center.

Local residents gathered at the observatory as early as 4 a.m. to have a front row seat for the much-anticipated spectacle.

The lawn was transformed into a sea of humanity in what became a massive sky-watching party.

"It's surreal. It's so bizarre," West Los Angeles sky-gazer Gail Carter told City News Service. "I thought it would be darker to be honest, more of a cloudy feeling day."

The observation deck on the 27th floor of Los Angeles City Hall was a popular viewing post as it was free and open to the public. Dozens of tourists and city workers jammed into the east side of the deck to get a view.

"A friend of ours, she had been here before and she was taking us around town and mentioned that there is an observation deck here at City Hall, so we decided why not. And since it's eclipse day, we'll always remember that," said Sandra Shields, of Palmdale.


To view the eclipse, people were required to wear special glasses. Without them, you can do permanent damage to your eyes. The glasses reduce brightness, blocking ultra-violet and infrared radiation and are regulated by the International Organization for Standardization.

Did you watch the solar eclipse? Share your photos/videos with #abc7eyewitness.