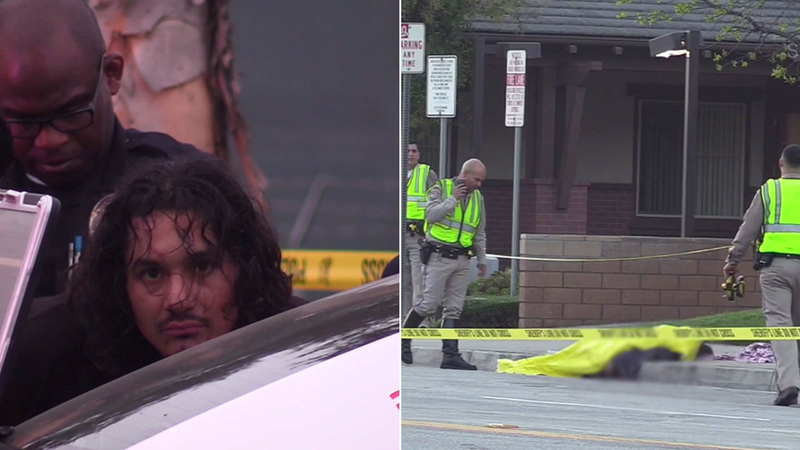 SEAL BEACH, Calif. (KABC) -- A deadly hit-and-run crash in Anaheim led to a police chase that ended in a crash in Seal Beach before officers opened fire on the suspect and arrested him on Sunday, police said.

The wild chain of events started about 5:40 a.m., when Anaheim police responded to a call of the hit-and-run near Ball Road and Gilbert Street, an unincorporated area of Anaheim, police said.

Authorities said a bicyclist traveling eastbound on Ball Road was struck by a 2002 Ford Expedition that for an unknown reason veered right, striking the victim. The bicyclist, identified as 52-year-old Encarnacion Salazar Munoz, was pronounced dead at the scene.

Encarnacion Salazar Munoz, 52, is shown in an undated photo.

Authorities heading to the scene spotted the suspect's vehicle, which then resulted in a chase through Orange County. Officers then lost sight of the vehicle and when they found it again, it had crashed at the intersection of Seal Beach and Westminster boulevards in the city of Seal Beach.

The suspect had crashed into a fence at a naval weapons station, according to authorities.

California Highway Patrol officers and Seal Beach police took over the pursuit crash, and a Seal Beach PD officer fired his gun at the suspect "as a result of the suspect's actions," according to a press release from the police department.

The suspect was not struck and the officer was not injured, authorities said. He was identified as 25-year-old Jason Rocha, of Riverside, and was taken into custody.

Family members later set up a small memorial for the bicyclist at the scene of the crash in Anaheim.

They said Munoz was heading home from work when he was struck and killed by the suspect.

"He would always give hugs. He was a hugger, a big, big hugger. He used to make lovely jokes, too," his niece, Lizabeth Bautista, said.

A GoFundMe page has been set up to help with funeral costs. You can donate at gofundme.com/3j27ymw