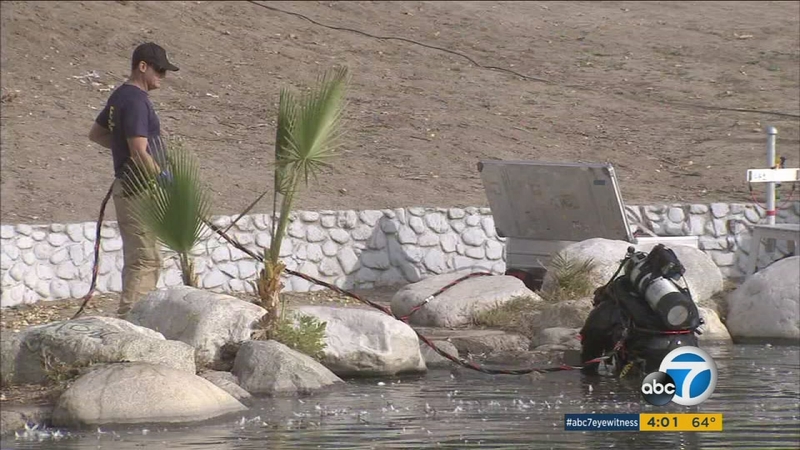 SAN BERNARDINO, Calif. (KABC) -- An FBI dive team is searching Seccombe Lake Park, just a few miles away from the site of the San Bernardino mass shooting. Eyewitness News has learned the search is related to the attack.

An official briefed on the investigation told ABC News that the team is searching the area as a precaution and to ensure that no evidence was missed. The official said investigators are not searching for any particular piece of evidence.

The FBI said they are looking into the possibility that San Bernardino shooters Syed Farook and his wife Tashfeen Malik were seen here at park in the period between the shooting at the Inland Regional Center and the shootout in which they were killed several hours later.

A senior official with knowledge of the investigation said the FBI received information that Farook and Malik spent time at the lake. The official said the purpose of Thursday's search was to see if the two left or stored anything at the lake, which is approximately 2.5 miles north of the IRC.

The dive team searching the lake specializes in underwater evidence retrieval, according to David Bowdich, assistant director with the FBI's Los Angeles office.

Bowdich said the park has already been extensively search, and that the underwater search could last for days.

The FBI said there is no belief at this point that there is anything dangerous in the park that could cause harm to the public.

Fourteen people were killed and 22 others were injured on Dec. 2 when Farook, 28, and Malik, 29, opened fire during a holiday banquet hosted by Farook's co-workers with the county health department. The two were killed hours later in a shootout with police, leaving behind a 6-month-old daughter.

The FBI has said that Malik declared her allegiance to the Islamic State group in a Facebook posting shortly before the attack.

FBI Director James Comey told the Senate Judiciary Committee on Wednesday that the two were radicalized well before Malik came to the U.S. on a fiance visa, and they had discussed jihad and martyrdom as early as 2013.

Meantime, new revelations from officials and public records show a much deeper connection between Farook and the man who purchased the weapons used in the mass shooting, 24-year-old Enrique Marquez.

Marquez and Farook had plotted a terrorist attack together back in 2012, ABC News reports. But Farook shelved the attack after the FBI made a round of terror-related arrests in different cities, Eyewitness News has learned.

The two were friends for years and became family last year with a sister-in-law in common. They were listed as witnesses on the marriage license when Farook's brother, Raheel, wed a Russian woman in 2011.

MORE: San Bernardino attack leads to questions about another marriage

Three years later, Raheel Farook and his wife, Tatiana, were witnesses to Marquez's marriage to her sister, Mariya Chernykh, according to Riverside County records.

The FBI is currently trying to verify Marquez's mental stability after he checked himself into a mental facility two days after the attack.