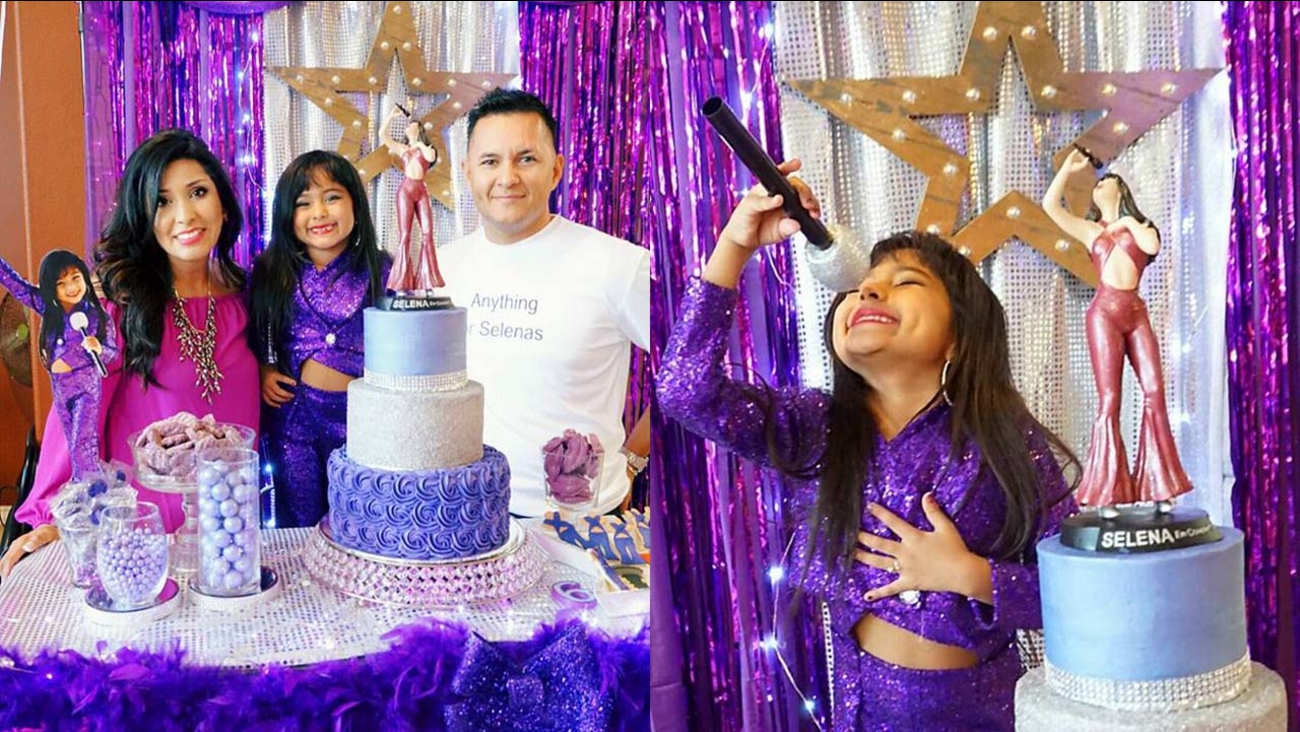 SAN ANGELO, Texas -- A little girl in San Angelo had a birthday celebration fit for a Tejano Queen. Ayvah Vega celebrated her 6th birthday with a Selena-themed party giving the world plenty of "fotos y recuerdos."

Her father Alex Vega told ABC7 sister station ABC13 in Houston that his daughter was a little girl with a big personality.

"She's been a creative, outgoing little girl since the age of 2," said Alex Vega. "She loves singing, cheer-leading and entertaining."

Alex Vega said his daughter's love for Selena began last fall when she found a video of the Queen of Tejano on YouTube.

"She came across the video and fell in love," said Alex Vega. "She loved the way Selena danced and sang. She was really intrigued by her outfits."


Ayvah then began to search for more videos of Selena and started blasting "Bidi Bidi Bom Bom" and other classics at home.

Her father purchased the "Selena" movie for little Ayvah and it quickly became her favorite film.

"She can recite all the words, sing all the songs and she even does some role playing from the movie," he said.

But her father said the "one unfortunate thing" that Ayvah doesn't know about is that Selena died. Alex Vega said his daughter thinks Selena's death in the movie was fake, and she has asked him repeatedly when part two of the movie will be released.

"We haven't told her the truth yet because she assumes movies are movies and they aren't real sometimes," said Alex Vega. "I just keep telling her it is a very special movie and there will only be one part."

Ayvah asked her parents if she could be Selena for Halloween and Alex Vega credits his wife, Belinda Vega, for making it happen. His wife had someone design a custom replica of the purple jumpsuit Selena wore to Rodeo Houston.

Alex Vega said when it came time to start thinking about Ayvah's birthday, she only wanted one thing: "Bailar Esta Cumbia" at a Selena themed birthday party.

We all "could fall in love" with how the Vegas responded to Ayvah's request.

Alex Vega said he and his wife knew putting together the event would be a "huge challenge," but luckily for them, several members of their family work in the music industry as DJs. Relatives donated a custom stage, speakers and lights for the birthday bash.

Her father said initially when Ayvah's guests arrived they thought it was a Selena Gomez-themed party. However, they quickly realized they were thinking of the wrong Selena when Ayvah started to teach her friends Selena's iconic dance move, "The Washer Machine."

Ayvah's party included a concert stage, a custom-made Selena pinata, themed cookies and a three-tier cake topped with a Selena figurine. The Vegas even invited a local singer known in San Angelo for Selena tributes to join the party and sing for the girls.

Ayvah and all of her friends also had the opportunity to get on stage and sing. Her dad even wore a special, "Anything for Selenas" shirt to the party.

Alex Vega said the party cost around $500, but that you couldn't put a price on the smile on his daughter's face and the other girls.