Convicted sex offender Cary Jay Smith, who at one point had not been required to register, has now been added to the state's official Megan's Law database.
KABC

Cary Smith to be required to register as sex offender

SANTA ANA, Calif. (KABC) -- Convicted sex offender Cary Jay Smith, who at one point had not been required to register, has now been added to the state's official Megan's Law database.

Smith, 59, has generated controversy since he was released from a mental hospital earlier this month after 20 years of confinement. At one point he had been on the state's sex offender list but was removed in 2005. That concerned local officials who described him as a danger to the community.

After efforts by local and state officials, he was once again required to register.

As of Tuesday, his name, photograph and description are now listed in the Megan's Law database. 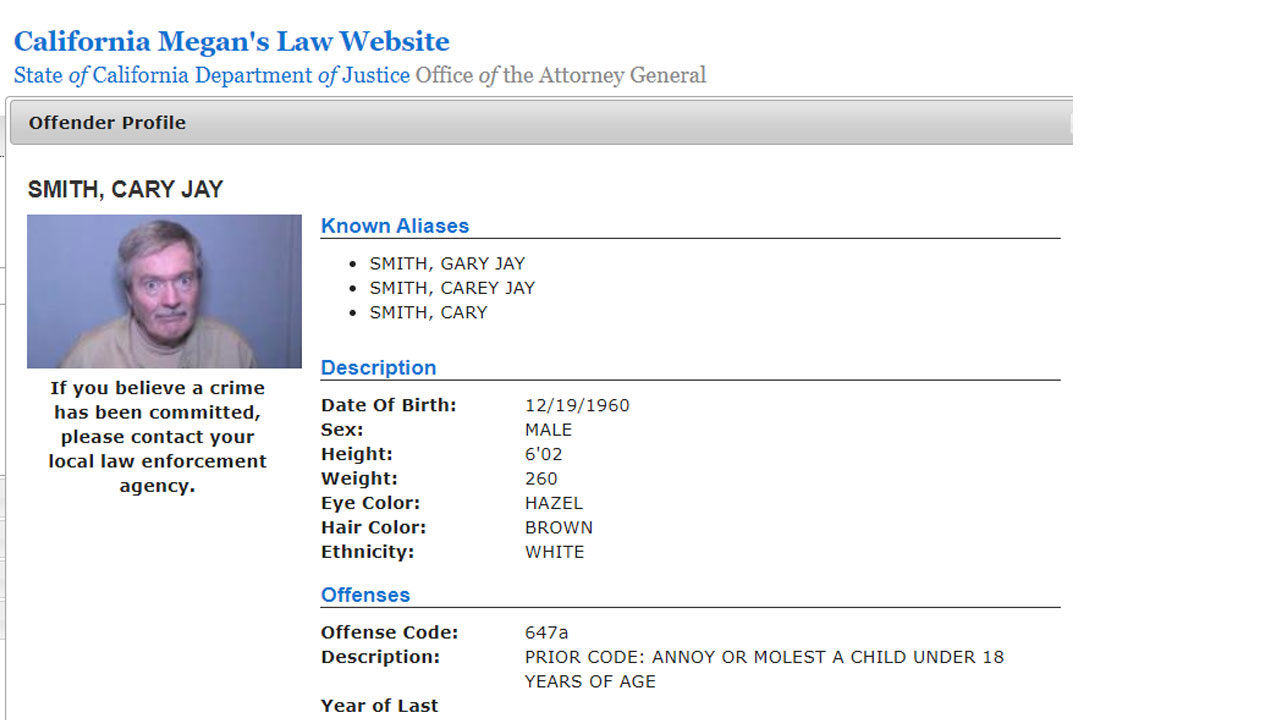 Orange County District Attorney Todd Spitzer says the state Attorney General's Office had taken Smith off the sex offender list in 2005 when it was informed that no criminal records were found for Smith. Authorities in Orange County only learned of this when 59-year-old Smith was released from a mental hospital earlier this month following more than 20 years of confinement.
In a letter sent Friday to Spitzer, state Attorney General Xavier Becerra said the department has been "diligently trying to obtain documentation regarding this individual's criminal history from multiple criminal justice agencies, and we made renewed requests to the Orange County Superior Court. We are now in possession of documentation that we believe supports serving this individual with Notice of Sex Offender Registration Requirement."

Since his release, he has moved several times across Southern California, setting off warnings to local communities from local law enforcement. His last known location was a health care facility in Costa Mesa.

While Smith was confined to a mental hospital, he testified to having fantasies about raping and killing young boys, according to the Orange County District Attorney's Office. He also said he liked to go by Mr. RTK, standing for rape, torture, kill.
In 1985, Smith pleaded guilty to a misdemeanor sexual offense involving a child and was compelled to register as a sex offender; that requirement was removed by the state in 2005.

The Orange County District Attorney's Office in 2002 filed 20 felony counts of lewd and lascivious acts with a minor against him, but the charges were dismissed due to the statute of limitations..

Each community where he has moved has protested his presence and demanded he leave. In Lake Elsinore, an angry group showed up at the motel where he was staying and deputies had to keep them from going inside to confront Smith.
EMBED More News Videos

A sex offender who was recently released from a mental hospital has relocated to San Diego County after moving several times around Southern California since he was set free, authorities say.