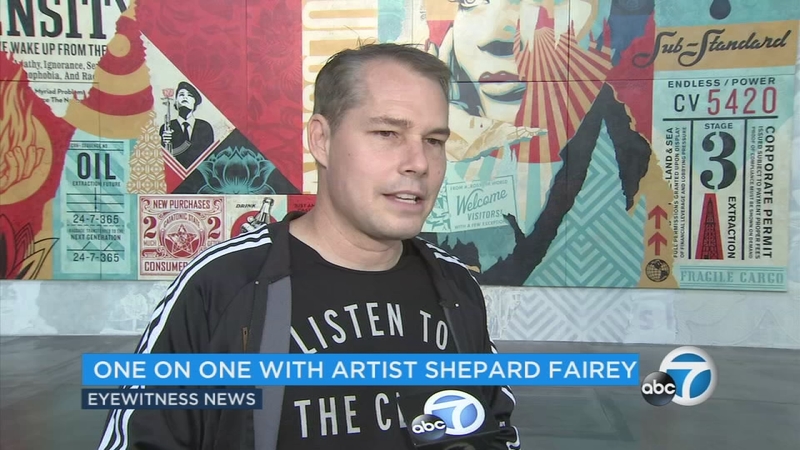 Now, an entire exhibit of Shepard Fairey's art is on display in downtown Los Angeles.

It's called "Damaged" because Fairey thinks that's the state of many things in crisis right now, like American society's approach to human rights, the environment and racism.

"I'm addressing a lot of those issues in my work," Fairey said. "I think that diagnosing is the first step to, then, repairing."

The exhibit includes works with overt political messages. One skeletal figure, outlined in red, dons a mask and wears a hat that reads, "make America hate again," an unveiled reference to Donald Trump's campaign slogan.

"I'm trying to critique, but also find ways to make people look at our shared humanity with the show," Fairey said.

Much of the work is for sale and some of the proceeds will be donated to charity.

The exhibit includes paintings, sculptures, illustrations, screen prints and pieces from Fairey's earlier works that have been repurposed.

Fairey said his favorite piece on display is a large, mural-like installation that is actually a set of canvas paintings.

Fairey also printed his own newspaper, "The Damaged Times," to send a message to people visiting the exhibit.

"If you're not happy with the media you're getting, be the media yourself." Fairey said. "Create your own media."

The newspapers will be free while supplies last. Fairey will have a printing press running inside the exhibit.