Hundreds gathered in Artesia to remember Sidhu Moose Wala who was an outspoken voice for the Punjabi community.
KABC
By Jaysha Patel 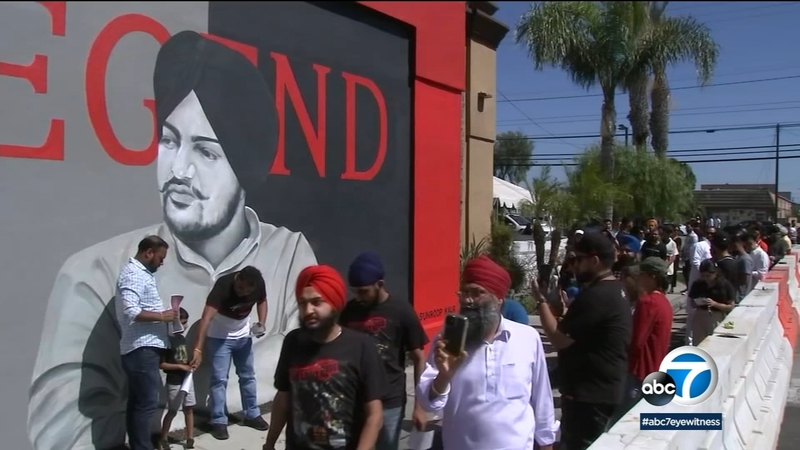 ARTESIA, Calif. (KABC) -- Sidhu Moose Wala, a rapper and politician in India, was an outspoken voice for the Punjabi community often rapping about sociopolitical issues. He was also a global icon with nearly 10 million followers on Instagram.

"Sidhu Moose Wala was like the Tupac of India. He spread out beautiful messages out to all of India. He has fans all over the world," said Vishal Narayan, founding president of the Good Karma Los Angeles.

On May 29, the 28-year-old rapper whose real name is Shubhdeep Singh Sidhu, was shot and killed in Punjab, India. His death was a devastating loss for millions of his fans around the world. Authorities are still investigating who killed him.

"Sidhu Moose Wala was and always will be a voice of truth and unfortunately this is what happens when voices are this loud, and bring this much truth and this much reality, some people get bothered by it. Sometimes a lot of people get bothered by it, and unfortunately we lost him because of his voice and because of his lack of fear," said event organizer J.Hind.

Sadness over his death has carried over all the way to Southern California. Artists and the community came together to create two murals to honor his memory which were unveiled at a memorial Sunday.

"I think this event really illustrates how public art can be in bringing people together and the activation of it is so powerful," said artist Sunroop Kaur.

The artists worked 12 to sometimes 20 hours a day to complete the murals.

"It's a moment of grief for everybody so this communicates what it is, how important it is for us to give back to the community after such a loss for the community at the end of the day," said artist Manmit Singh.

The murals are located at London's Pub and Grill at 11651 Artesia Blvd. The organizers say they've been told the murals will remain there forever.