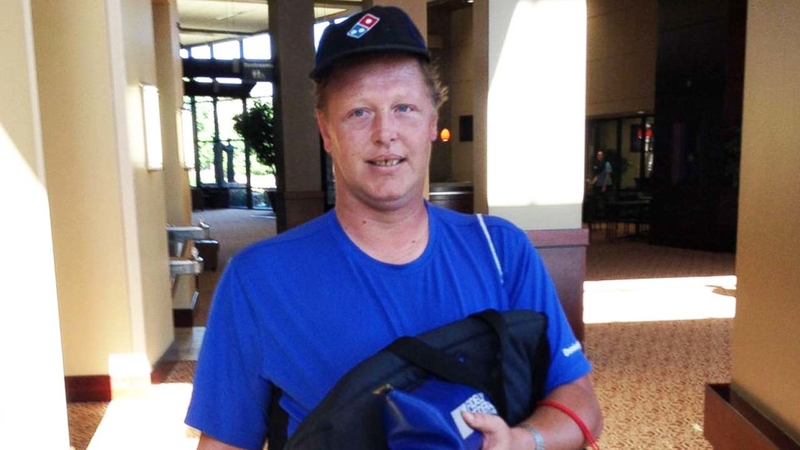 MARION, Ind. (KABC) -- One Indiana pizza delivery man is used to tips worth a few bucks, but he got the surprise of a lifetime while he was out on what he thought was a regular delivery.

More than 3,000 students filled the seats Wednesday in a chapel at Indiana Wesleyan University in Marion during the mandatory weekly chapel service.

The speaker, Keith Newman, CEO of Residential Education, wanted to physically involve someone in the topic of the day: "Do for one, what you wish you could do for everyone." Newman said he heard a pastor teach that saying and wanted to pass it on to the students.

To illustrate the main point of his talk, Newman ordered two pizzas while he was on stage. That's where Domino's delivery driver James Gilpin came into the picture.

"They pulled me out on stage, and the gentleman started talking to me for a couple minutes and then he announced that he had $1,248.86 for me. Everybody was cheering," Gilpin told ABC News. "At the time I didn't know what to think; it didn't sink in until about two hours afterwards."

While Gilpin was on his way to deliver the pizzas, Newman had asked the room full of students and faculty to donate any money they wanted as a tip and also write a note of encouragement on a slip of paper they received when they walked in.

"I said to the students, 'There's no pressure, and if you think I'm crazy, don't put anything in. It's no big deal,'" Newman said. "The students just kind of went nuts and stood up cheering for James. Some kids didn't have money but put in gift cards from their wallets."

In addition to the $1,248.86, Gilpin also walked away with nearly $100 in gift cards and thousands of notes of encouragement. The total for the pizza order was $12.50.

"I thought it was very nice for an average Joe like me to get something like that. They didn't know me from me Adam, and they just picked me out random and handed me the money. It was really nice," Gilpin said. "It's nice to know that there's a lot of encouragement from Indiana Wesleyan and their students to do something like that. It couldn't have come at a better time. I'm very grateful for what they've done for me."

Gilpin said he plans to use the money to fix his car, for home improvements and toward Christmas gifts for his 6-year-old and 5-year-old.