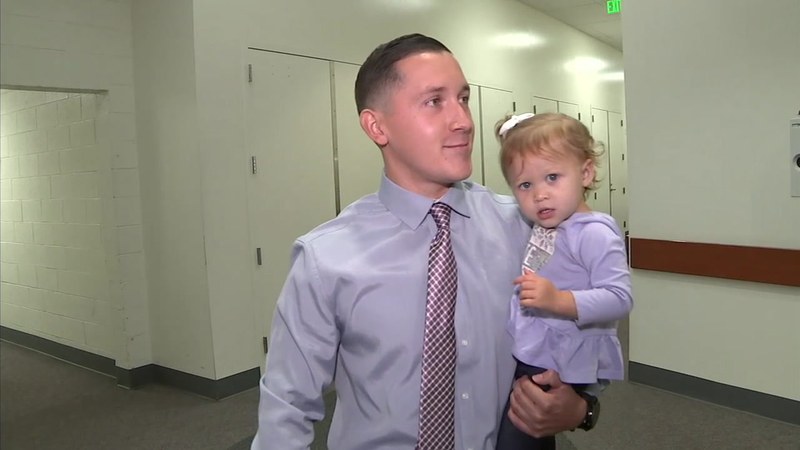 Ontario officer wounded in Vegas shooting is back on the job

ONTARIO, Calif. (KABC) -- An Ontario police officer who was among those wounded during the Las Vegas shooting massacre last year is back on the job.

"It's been a frustrating and emotional journey," Michael Gracia said. "I miss work. I miss talking with people, so being back here is a blessing."

Gracia was with his fiancée Summer Clyburn on Oct. 1, 2017 in Las Vegas, at the Route 91 Harvest festival, when a gunman opened fire into the crowd. Fifty-eight people were killed and hundreds were left wounded, either by bullets and shrapnel, or trampled as concertgoers tried to escape.

"I survived a horrible incident," Gracia said. "So it's a blessing to be here with my daughter, and my fiancée, and be here at work serving again."

Gracia was struck by a bullet on the left side of his head and suffered brain damage. His fiancée said he had to learn how to eat, drink and talk all over again.

"It's very intensive therapy that he had to go through," Clyburn said. "He would get things put on his face to get his muscles going again."

According to Clyburn, Gracia has struggled to learn how to speak again. But she said it's a battle that he's been more than capable of winning.

"He's so inspirational. He keeps pushing forward, saying I'm not going to give up," Clyburn said. "And here we are today and he's back at work doing phenomenal, so it's awesome."

For the time being, Gracia is taking reports behind the front counter. He said interacting with the public allows him to work on his speech.

"Talking to the public is therapy for me to get me talking better," Gracia said. "Getting back into that routine of helping people and talking to them."

Deputy police Chief Michael Lorenz said Gracia has been an inspiration to the department.

"Mike's spirit has been everything in this process," Lorenz said. "He always kept a positive attitude. Seeing his attitude and determination to get back, and seeing it come to fruition is amazing."

But Gracia said his determination won't stop now. And don't expect to see him at the front counter for long.