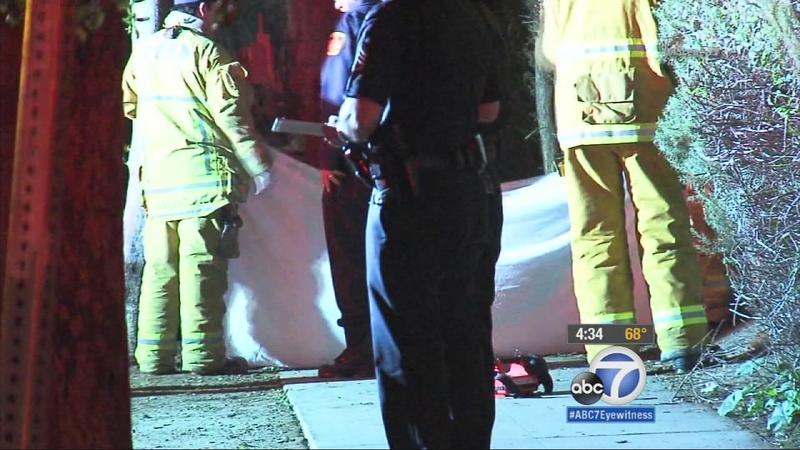 Witness Luis Chavez said he saw the fire around 3:30 a.m. near Fortuna and 57th streets. When he got a closer look and realized it was a body, he began dousing it with water.

The body was found on the sidewalk in front of a small park.

Chavez said he believes the victim was already dead before being dumped on the streets and lit on fire.

Investigators initially believed the victim was a woman, but later said it was a man. They said the body was burned beyond recognition.

The identity of the victim remains unknown. Arson investigators brought in a specially trained dog to help determine if an accelerant was used.

Police are searching for clues as to what took place but have very little to go on.

"At this time, all we know is that it's a male. We're unable to determine a descent or the race. We don't know the age either, and we don't know if there's any other crimes," said Capt. Jorge Rodriguez with the Los Angeles Police Department.

No one saw or heard anything before the fire. Investigators are canvasing the neighborhood for clues and will also look through surveillance footage from surrounding cameras.

"We're hoping to have some video footage. Hopefully there will be some sort of surveillance cameras or something on there that would capture what happened here this morning," Rodriguez said.

Detectives say burned bodies are usually a mark of organized crime. They can't say for sure if that is the case in this horrific incident, but they do say this crime is unusual for this particular area.

"This is generally a quiet street. We don't have a lot of activity going on in this area, so it's rather an unknown street for our division," Rodriguez said.

The coroner will perform an autopsy to determine the exact cause of death.