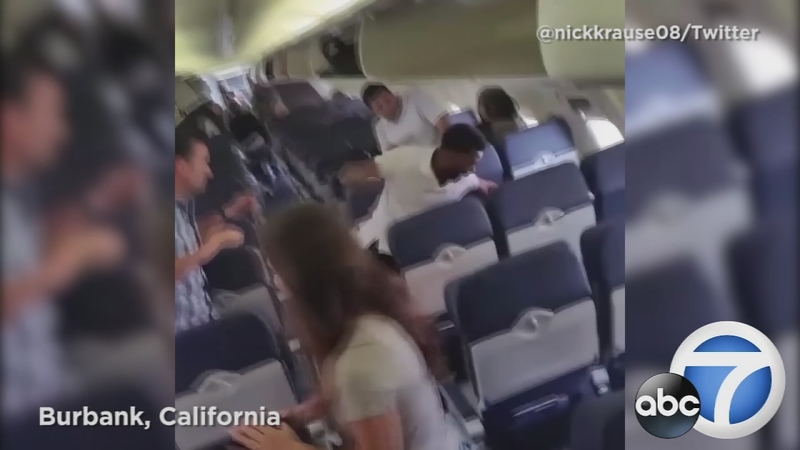 BURBANK, Calif. (KABC) -- A vicious fight broke out on a Southwest flight as it was taxiing in Burbank, as one man was seen repeatedly punching another before passengers were able to pull him away.

The suspect was arrested on suspicion of assault and battery, while police said the victim suffered a contusion to his left eye, a laceration to his nose and a chipped tooth.

Burbank police identified the suspect as Chaze Mickalo Cable, 37, of Lancaster. He was arrested for assault and battery and held on $50,000 bail.

In video captured by other passengers, the suspect is seen wrestling with another man as a woman screams "Get off, what is wrong with you!" and tries to pull him away.

The wrestling turns to punching as the two roll over onto another seat and fall on top of a flight attendant who was trying to intervene.

The suspect is seen throwing multiple punches before other passengers are finally able to intervene and stop the attack.

A vicious fight broke out on a Southwest flight as it was on the ground in Burbank, with one man repeatedly punching another before passengers pulled him away.

Airport police responded and arrested Cable, then turned him over to the Burbank Police Department.

It wasn't immediately clear what started the fight or if the two men knew each other prior to the flight.

Flight 2530 on Sunday had arrived from Dallas and was stopping in Burbank before heading to Oakland. The fight occurred as passengers were preparing to deplane.

In a statement, Southwest said the altercation actually involved three passengers and thanked its employees for intervening.