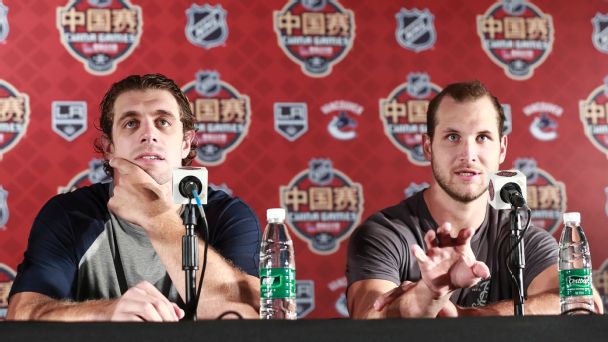 Biggest changes: The team that missed the playoffs for the second time in three seasons remains largely unchanged. The biggest alterations came behind the bench and in the front office. Identifying a need for change after another disappointing season, the Kings fired general manager Dean Lombardi and coach Darryl Sutter, the architects of their Stanley Cup victories in 2012 and 2014. Franchise icon Rob Blake is the new GM, and longtime assistant coachJohn Stevens assumes the top coaching job, likely indicating that the team's system won't be radically altered. On a team that struggled to score, there is hope of a resurgence from Mike Cammalleri, who signed a one-year deal with the team that drafted him in 2001.

Case for: This club is still only three years removed from hoisting the Stanley Cup, with a number of the key pieces from that championship squad remaining on the roster. In fact, nine current players were part of the team that won two titles in three seasons. Anze Kopitar and Drew Doughty should bounce back from disappointing seasons made far more laborious by their participation in the World Cup last year. With a healthy Jonathan Quick, who was sidelined for most of last season, and the continued development of young defensemen Derek Forbort, Paul LaDue and Kevin Gravel, the Kings could be poised for a return to the postseason. Stevens has also shown the ability to turn teams around. In his first full season as the Philadelphia Flyers' head coach (2007-08) he took a team that posted by far the league's worst record the previous season and guided them to the Eastern Conference final.

Case against: Despite Quick's injury and an inexperienced blue line, defense wasn't the problem last season. Their most glaring flaw was a lack of offense. The team tied the Buffalo Sabres for 24th in offense last season despite ranking seventh in shots per game. The Kings relied almost entirely on the trio of Jeff Carter, Tanner Pearson and Tyler Toffoli, which accounted for 36.2 percent of the team's total offense, demonstrating a glaring disparity when it came to scoring distribution. That the team's only offensive addition was Cammalleri, an established finisher who notched a career-worst 10 goals last season with the New Jersey Devils, doesn't inspire confidence. It's also imperative that this defensive corps develops quickly. Despite featuring a stout team defense, the team closed out the season with three rookies on its blue line. If that group fails to develop and ultimately improve, the Kings will be out of the playoffs once again.

Trade bait: Blake will be all too happy to find a way to deal forwardsDustin Brownand Marian Gaborik, who have underperformed during their prohibitively expensive long-term contracts. If the younger skilled players can establish themselves as everyday contributors, that could make veterans such as Kyle Clifford expendable. A valued piece of the Kings' pair of Cup titles, Clifford's playoff experience could prove invaluable for a young team looking to make the leap.

Scout's take: "Jonathan Quick, regardless of what people say, to me is an elite goaltender. Take an elite goaltender out of your lineup, Doughty had a down year, Kopitar had a down year, I don't think it's going to go so well. That was a team that was banged up, and the guys they rely on for big minutes had off seasons. If they have good seasons and they get somewhat good health, they can be a playoff team."

Prediction:Fifth in the Pacific Division