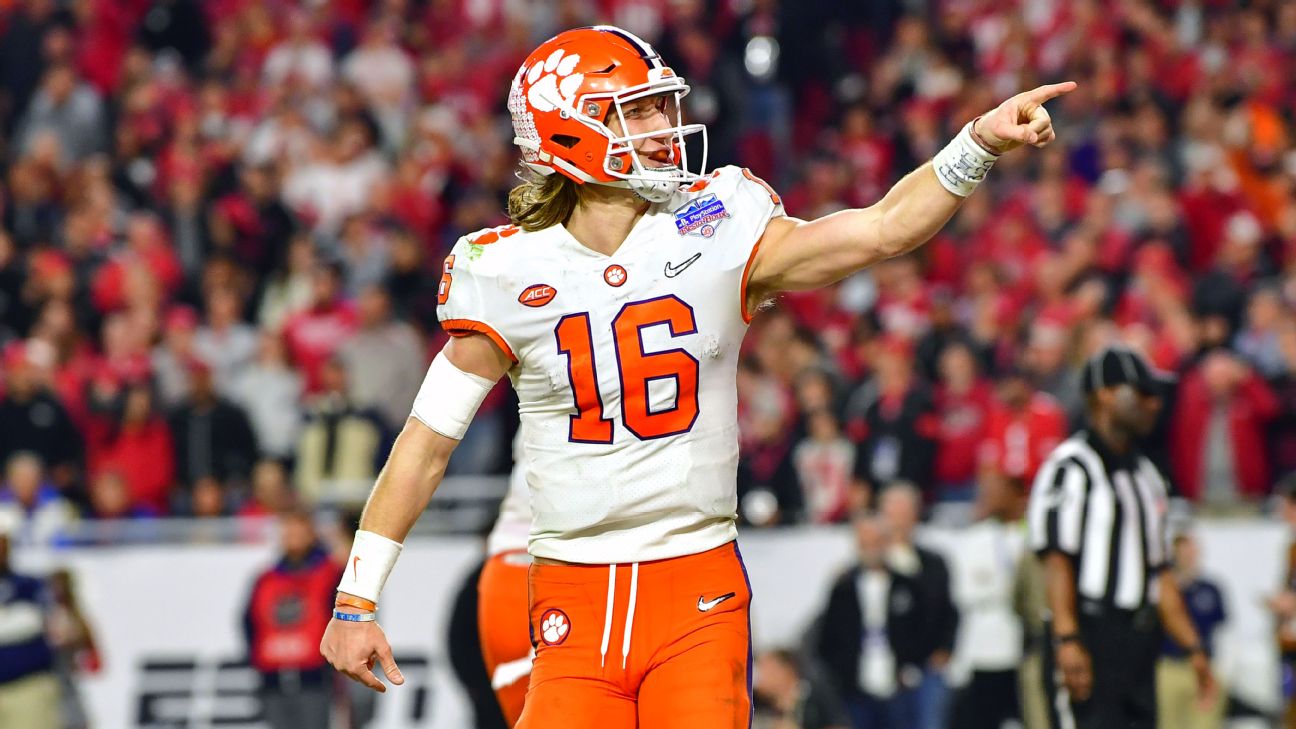 There was a time, not so long ago, when the flood of quarterback talent from college football to the NFL seemed to have dried up to little more than a trickle. There were some lean years for the position in the NFL draft. From 2010 to 2016, 19 quarterbacks were taken in the first round, but only three project to be starters in 2020 -- and eight were out of the league last year.

But the tide, thankfully, has turned, and the 2020 class of Joe Burrow, Tua Tagovailoa, Justin Herbert and Jordan Love will soon be joined by another pretty stellar group of passers in 2021. So with a college season and a full year of NFL draft prep still remaining, let's take a look at this next group of impressive QBs ready to make the pro jump.

College football reporter David Hale examines the potential 2021 quarterback draft class, and national NFL reporter Kevin Seifert runs through the teams that could be in the QB market sooner rather than later. Stats to know are provided by ESPN Stats & Information.

Jump to: QBs | Teams in need

MEET THE QUARTERBACKS FOR 2021

Stat to know: Lawrence's 66 career passing TDs is the most by a player through his sophomore season in ACC history.

There's a short list of truly can't-miss QB prospects over the years, and Lawrence stacks up nicely with the John Elways and Andrew Lucks of the world. His combination of size (6-foot-6), athleticism, accuracy and intelligence makes him a near lock for success at the next level, and he has continued to refine his skill set despite immense early success.

Worried about the transition from college to the pros? He led Clemson to a national championship as a true freshman in 2018 and has a 25-1 record as its starting quarterback.

Here's the list of QBs who've had at least 40 touchdown passes and three or fewer interceptions in a season: Justin Fields. That's it. After a rocky start to his career at Georgia, Fields -- the No. 1 recruit in the 2018 class, according to ESPN -- blossomed at Ohio State, leading the Buckeyes to the College Football Playoff and demolishing Big Ten defenses in the process.

At 6-3 and 223 pounds, Fields has the wheels to run when necessary, but he has shown a propensity for managing the pocket, too, and his downfield accuracy is as good as that of anyone in the country. He accounted for more than 3,700 yards and 51 touchdowns in his first season as a starter in 2019.

It seems like a long time ago now, but back in Week 2 of 2019, Ehlinger went toe-to-toe with Burrow and LSU, completing 31 of 47 passes for 401 yards, four TDs and no interceptions (and rushing for another 60 yards and a score). At that moment, he might've seemed every bit the better NFL prospect than his counterpart.

The rest of Ehlinger's season was solid, but while Burrow and LSU devoured all comers, the road was a bit rockier for the Texas QB, who passed on the draft for a chance to finally climb the mountain and win the Big 12 in 2020. He has the size (6-3), accuracy and mobility to be a top pick in the 2021 draft, but getting Texas over the hump would be the icing on the cake. Ehlinger has accounted for 8,100 yards and 80 touchdowns over the past two seasons. Only Burrow has more among Power 5 QBs.

Newman's size (6-4, 230 pounds) and athleticism have drawn Cam Newton comparisons, but there are still some major question marks about whether he can produce at a consistently elite level. For one, he ran more of an option offense at Wake Forest last season, and he'll test his skills in a predominantly pro-style attack after transferring to Georgia this year. But he was one of just seven Power 5 QBs with at least 2,800 passing yards and 500 rushing yards in 2019.

Newman also hasn't yet gotten to play alongside the type of talent Georgia has, so he could benefit from a stronger supporting cast. One caveat: When he had star receiver Sage Surratt on the field with him the past two seasons, he completed 64% of his throws with 29 touchdowns, six interceptions and a 74.7 QBR. Without Surratt on the field, those numbers plummeted to 54% completed, six touchdowns, eight interceptions and a 40.5 QBR.

Stat to know: Purdy's 8.38 yards per attempt were second best among Big 12 QBs in 2019, trailing only Jalen Hurts.

A moderate recruit out of high school, Purdy has excelled from the jump at Iowa State, starting in 2018 as a true freshman before a stellar sophomore campaign in 2019. His mix of accuracy and athleticism has made him one of the most dangerous weapons in the offensive-minded Big 12. He posted two six-TD games last season, one of which came against playoff-bound Oklahoma.

His size (6-1) isn't ideal, and to suggest Iowa State lacks a rich history of producing top NFL talent would be an understatement. The Cyclones' last first-rounder came in 1973. But Purdy was one of just two quarterbacks with at least 3,900 passing yards, 35 touchdowns and fewer than 10 picks in 2019. The other was Burrow.

Mond has good size (6-3, 217 pounds), plenty of athleticism (eight TDs on the ground last year), three years of starting experience and a QB guru for a coach in Jimbo Fisher. That's a lot to like.

But Mond has also been pummeled by having a woeful offensive line; he was sacked more than all but one other Power 5 QB over the past three seasons (83 times) and blitzed as often as anyone. Another big concern is his numbers against quality opponents. Against winning teams last season, he averaged just 5.8 yards per attempt with a 112.1 passer rating.

Stat to know: Costello, who played his first three years at Stanford, appeared in just five games as a junior in 2019, but in 2018, his 82.6 QBR was the sixth best in the FBS and his 35 completions of at least 20 air yards ranked fourth.

This time a year ago, Costello looked like a safe bet to be a future first-rounder. Then injuries and a bad Stanford offensive line took their toll. As a sophomore in 2018, Costello threw for more than 3,500 yards and 29 touchdowns, but injuries cost him six of the last eight games of 2019, and his performance was shaky at best.

Getting zero help from the ground game hasn't made life easier, but a rebound season in which the 6-5 prospect can stay on the field would go a long way toward rejuvenating the reputation of a guy who was a prized recruit coming out of high school. And he'll look to do it at a new school after transferring to Mississippi State.

Stat to know: Lance threw 28 touchdown passes and zero interceptions in 2019, his first season as a starter.

If there's a hot under-the-radar name among 2021 QBs, it's definitely Lance, who set the FCS on fire last season. He completed 69% of his throws and racked up 42 total touchdowns en route to a national championship.

At 6-foot-3 and 221 pounds, Lance has physicality and good mobility, and plenty of NFL folks have already taken notice. The question is how his skill set translates to a higher level of competition. He has never thrown a pass against an FBS foe, and his playoff numbers -- 60% completion rate with five passing TDs over four games -- didn't exactly match his regular-season production. Lance, who will be a third-year sophomore, is a wild card, but the upside is tremendous.

Other QBs to watch

WHICH TEAMS MIGHT BE LOOKING FOR A QB NEXT SPRING?

Note: Quarterback ages are as of the expected start of the 2020 NFL season.

If the Colts thoughtJacoby Brissett was a long-term answer, they wouldn't have signed Rivers -- even if it's only for one season. And unless fourth-round pick Jacob Eason somehow demonstrates enormous capacity in what could be a shortened training camp and regular season, the Colts will have an obvious opening in 2021.

Brees has been playing year-to-year for a while, but his agreement to join NBC Sports after retirement brings extra focus to his status. The Saints haven't fully guaranteed him any cash beyond the 2020 season. They did sign Taysom Hill to a two-year contract extension that guaranteed him $16 million over the next two years, the kind of money a team would signal a possible transition starter, and signed free agent Jameis Winston to a one-year deal. Regardless, the Saints are operating in a way that suggests they believe they will need a new starter in 2021.

The Steelers are counting on Roethlisberger's full recovery from elbow surgery, but he doesn't have any full financial guarantees for the 2021 season. And there is no reason to project Mason Rudolph or Devlin Hodges as a long-term answerbased on the pair's 2019 performances as injury replacements.

To this point, Patriots coach Bill Belichick has done everything to suggest he plans to give Stidham the first crack at replacing Tom Brady. Hoyer is a trusted hand and backstop. Free agents Cam Newton and Andy Dalton could enter the conversation at some point. But if Stidham falls short, and the Patriots struggle in 2020, they could be in position to draft a higher-profile replacement.

Brady's fully guaranteed $50 million contract means he will be the Buccaneers' starter for the next two seasons, barring injury or retirement. But it would be irresponsible for Tampa Bay not to plan for life after Brady, who will be 44 at the end of 2021. His backups at the moment are Blaine Gabbert and Ryan Griffin.

Many around the league expect the Bears to decline Trubisky's fifth-year option, according to ESPN's Adam Schefter. Such a move would indicate the Bears have all but moved past Trubisky as a future starter. The Bears would face a significant cap hit for moving on from Foles before the 2021 season, but that doesn't mean they wouldn't be shopping in the draft (again) for the next Sid Luckman.

Minshew was a revelation as a rookie, but there is a big difference between delivering a bright spot during a lost season and establishing long-term bona fides. The Jaguars will no doubt be tempted to capitalize on the financial advantages of his rookie contract. But if they're near the top of the 2021 draft, they might also be tempted to pursue another quarterback altogether.

Even if the Cowboys don't get Prescott signed to a new deal, they can squat on his rights for at least one more season with a second franchise tag. But the cash and cap value of that tag in 2021 would be about $37.7 million, and more importantly, it wouldn't put the Cowboys any closer to getting him signed for 2022 and beyond. No one thinks the Cowboys want to part ways with Prescott, but it takes two parties to make a deal. For that reason, the situation bears watching in 2021.

The clues are in plain sight. In two seasons under coach Jon Gruden, Carr ranks No. 21 in Total QBR. The Raiders have lost 21 of their 32 games over that stretch, and free agent Marcus Mariota is the kind of high-end backup teams sign when they aren't certain about their starter. Finally, Carr has no more guaranteed money remaining in his contract. That makes 2020 a potentially make-or-break year for Carr with the franchise.

Ryan is exceptionally durable, having missed three starts in his 12 seasons. For good reason, few people think of him as nearing the end of his career -- or even his time in Atlanta. But when the 2020 season begins, he'll be only one year younger than Aaron Rodgers was when the Packers decided to draft Jordan Love. If it isn't in 2021, it'll be soon after that when the Falcons start thinking about the future. 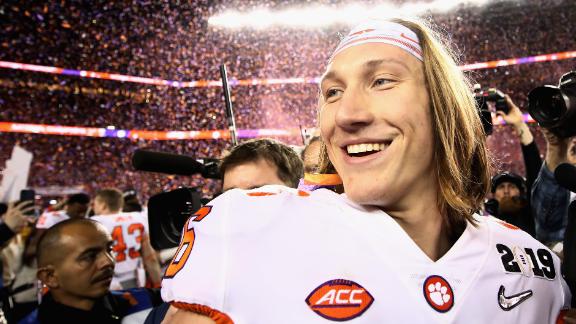 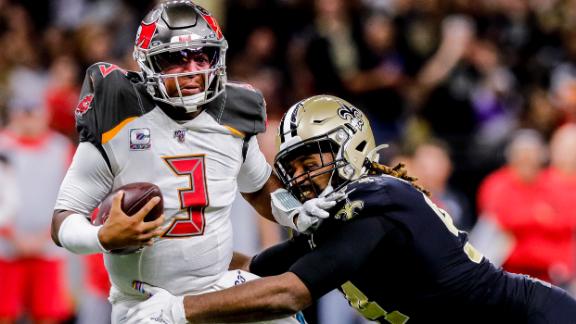