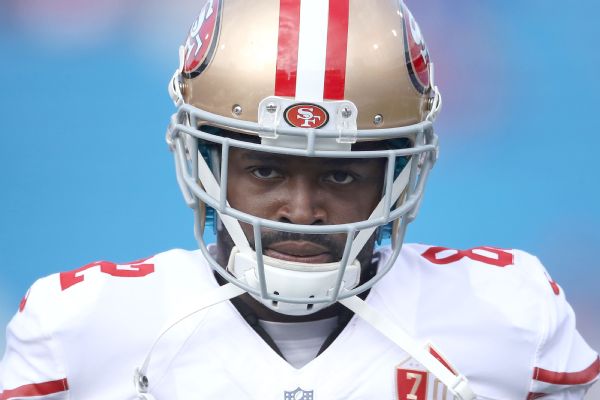 SANTA CLARA, Calif. -- San Francisco 49ers receiver Torrey Smith had never been knocked out on a football field before Sunday's game against the New York Jets.

Smith said Thursday he was unconscious after he landed awkwardly on his head and shoulder while attempting to come down with a catch in the third quarter.

After being motionless on the field for a few moments, Smith eventually was taken back to the locker room by cart with a towel draped over his head.

"Apparently I was crying there, I was crying in [the locker room] about how frustrated I was," he said. "I don't remember anything. That's one of the things that comes with it. But as long as I'm feeling better each and every day, that's all I'm concentrating on right now."

Smith said he remembered the play call that was sent in before the snap, but there's a gap in his memory after that. He couldn't recall anything from then until he rode home from Levi's Stadium on Sunday evening.

"I've never been knocked out before and I've never had a concussion like that, either," Smith said. "It's pretty scary, but things are better and they're just making sure that I am taking the right steps."

After watching the play, Smith said he thought it could have been worse, though he was frightened by what he saw.

"You see these things on like YouTube," he said. "I've seen people get knocked out in games before. But definitely when you look at it and it's you, it's more like a dream afterwards than something that really happened. It's weird."

Smith, who has 20 catches for 267 yards and three touchdowns this season, remains in the concussion protocol. He has not participated in practice all week as the Niners prepare for a game in Atlanta.

"Odds of me playing are probably slim," Smith said. "It probably wouldn't look too good, being as I was knocked out anyway."

Smith doesn't intend to shut it down for the season, but did say he wants to be thorough, especially given the nature of the injury.

"If I feel good, I'll play," Smith said. "Hopefully I am feeling good next week. That's the goal.

"You never want to go into something and your health is at risk. It's something you want to be smart with. I have two kids, so you kind of thing long-term on things like that. So I don't think it's worth rushing it back. Even if we were in contention for the playoffs or whatever, I would still try to be as smart as possible. You trust the guys that are here. I'll end up being all right."
Related topics:
sportsespnunconscioussan francisco 49ersreceiverknocked outnfltorrey smithconcussionhead injury
Copyright © 2022 ESPN Internet Ventures. All rights reserved.
TOP STORIES
93-year-old Moreno Valley homeowner shoots, injures intruder
Nipsey Hussle murder suspect attacked in jail, attorney says
CA lawmakers to vote on $307.9 billion spending plan
OC Mongols biker club seeking new trial in racketeering case
Blink-182's Travis Barker reportedly hospitalized in LA
LA 4th of July weekend fireworks buyback event puts safety first
R. Kelly sentenced to 30 years on sex trafficking conviction
Show More
Father, 10-year-old son found dead next to car in Chatsworth
LA startup aims to transform virtual learning, boost class offerings
Justice Stephen Breyer announces when he will leave Supreme Court
SoCal teen praised after finding lost purse, tracking down owner
Trump WH attorney disputes Hutchinson testimony about handwritten note
More TOP STORIES News