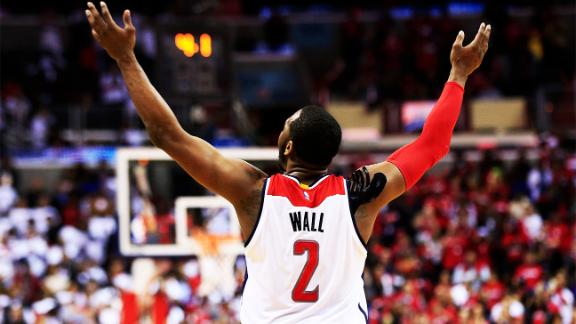 The first round of the 2015 NBA playoffs is just about over. Where do things stand right now? The 5-on-5 dives in.

1. What's been the most important thing we've learned in Round 1?

Chris Forsberg, ESPN.com: It's probably safe to go back to best-of-five, first-round series (ducks and covers as Clippers and Spurs fans start shouting). Five of the eight series ended in five games or fewer. Let's save everyone some grief and go back to five-game series under whatever playoff alignment you desire. With the time saved, you can safely stretch out the regular season an extra week.

Scoop Jackson, ESPN.com: That theAtlanta Hawksmay not be who we thought they were. Vulnerable. Beatable. Exposed. Now making the conference finals are suspect, let alone being the team that reps the East in the NBA Finals.

Kevin Pelton, ESPN Insider: Kevin Love will miss the rest of the postseason. Nothing else that has happened in the past two weeks will have nearly as big an impact in terms of the eventual Finals matchup and champion. TheCavalierscan still win the East without Love, but it'schallenging to see them winning the title.

Ramona Shelburne, ESPN.com: I don't know if it's something we learned, or something that happened, but the Love injury is by far the most important development of the first round because of its implications this season and for the future. Love may not have fit in/fit out in Cleveland this year, but he was more valuable on the court for the Cavs than he was off of it and now there's a chance he could have played his last game in wine and gold.

Ethan Sherwood Strauss, ESPN.com: TheSpurs are mortal. They've done many impressive things in this thrilling series against the Clippers, but Tony Parker's play has to worry San Antonio fans. He used to slingshot through defenses on those ball screens with Tim Duncan. The slingshot rubber band has since loosened to where Parker slowly tumbles into easy containment. It's hard to watch.

2. Who or what has been the biggest disappointment of Round 1?

Forsberg: The death of Playoff Rondo. No matter how bad things got in Dallas during the regular season, everyone in Boston was bracing themselves for how it would feel to watch Rondo turn back the clocks and dominate on the big stage. And then the opposite happened and the Mavericks withheld his playoff share (while Celtics fans simply shrugged and made their contributions to the "Keep Jae Crowder" fund).

Jackson: TheToronto Raptors. Losing to theWizardsisn't the worst, it was getting swept (and losing Game 4 by 31) as a 4-seed -- that's the problem. They proved that their issues go deeper than just having a bad series; they proved Paul Pierce was right about them.

Pelton: The Raptors. The Wizards' sweep wasn't quite as lopsided as it seems after the fact -- it's interesting to wonder how different it might have turned out had Terrence Ross drawn a foul on a lob at the regulation buzzer in Game 1, which Toronto lost in overtime -- but coach Dwane Casey never adjusted to what Washington was doing, and the Raptors' effort in a 31-point Game 4 loss was embarrassing.

Shelburne: I don't usually resort to using all capital letters to make a point, but it's gotta be THE MAVERICKS!!! I really thought the veterans on that team would squash whatever issues they had come playoff time and push the Rockets. Instead they completely imploded. All season there has been a sense that counting on so many players in the last year of their contracts was affecting the chemistry in Dallas, but I don't think anyone realized how toxic things had become. The Rajon Rondo affair was downright ugly and it cost Dirk Nowitzki one of his last best chances at another ring.

Strauss: Kevin Love's injury. It's doubly disappointing because the game was so pointless. Really, a series should just end at 3-0. No team has ever come back from 3-0, so most fans and players get that the result is inevitable at that juncture. Whether he intended to harm Love or not, Kelly Olynyk's team had little to lose from his actions because they were playing out a foregone conclusion.

3. Who or what has been the most pleasant surprise of Round 1?

Forsberg: The return of Paul Pierce's swagger. OK, so it started before the postseason, when he called out Deron Williams and theBrooklyn Netsfor his miserable experience during the 2013-14 campaign, but the 37-year-old Pierce's aversion to customs and acceptance of Drake-jabbingPhotoshops was fascinating. Better yet, he backed it up with his play on the court.

Jackson: The Wizards. Good to see that they (so far) ended up returning to being that "team no one wants to see" many of us expected them to be in our preseason predictions.

Pelton: A healthy Dwight Howard. As Bradford Doolittle broke down earlier this week, Howard has performed at a near-peak level so far. Since coming back from injury late in the regular season, he's looked much healthier. TheRocketswill need him to keep it up to have a chance to reachthe Western Conference finals for the first time since 1997.

Shelburne: We knew the Bucks were going to be a good young team for years to come. But I don't think anyone expected them to push Chicago the way they did in the first round. The Bulls' demolition of Milwaukee in Game 6 will probably obscure the fact that Jason Kidd's bunch found their playoff legs in this series.

Strauss: Wizards. Paul Pierce at the 4! Playoff Randy Wittman! Nobody could have seen it coming, but the Wizards are currently the East team with the fewest problems. And they're doing it with a coach who's not even sure how to hold his clipboard.

4. Which team or player that didn't advance faces the most uncertain future?

Forsberg: Toronto obviously needs a reboot, but the more intriguing situation might be in Dallas. The Mavericks must move on from the Rondo disaster, will probably watch Monta Ellis opt out, will have to pay up for Al-Farouq Aminu, and are banking on being able to lure another star like LaMarcus Aldridge or DeAndre Jordan because of local ties. With Chandler Parsons' injury, it will be interesting to see if the Mavs can power through all the obstacles.

Jackson: Choose: LaMarcus Aldridge or the L.A. Clippers. If the Clippers don't win Game 7 at home, Steve Ballmer is going to begin seriously looking at what he spent $2 billion on. Aldridge? His only uncertainty is which coast he'll be playing on next season.

Pelton: The Trail Blazers. While other teams like the Raptors have choices to make, the Blazers' uncertainty is largely out of their hands. They have to hope LaMarcus Aldridge is willing to re-sign as an unrestricted free agent. In that case, the other pieces to the puzzle should fall into place.

Shelburne: Aldridge. For months there have been whispers around the league that Aldridge is far more in play this summer than has been assumed in the past. Why? He's 30, the team has been past the first round only once in his nine years in Portland, there may be a bit of jealousy withDamian Lillard's growing profile, and he just so happens to keep offseason homes in Los Angeles and his home state of Texas.

Strauss: Portland. Is LaMarcus Aldridge leaving? Could the Blazers afford to build without him? Should they, considering his age and relative lack of scoring efficiency? What if he adds a reliable 3-pointer to his game? The LMA questions contain multitudes.

Jackson:Steph Curry. Everyone knows the MVP votes are submitted before the playoffs begin. But anyone who didn't vote for him, I'm sure they were calling the NBA asking for their vote back.

Pelton: Even though his team didn't win a game, I'm still going with Anthony Davis. The Pelicans asked Davis to do everything -- and he did enough to finish with the best PER of any player in the first round. I have a hard time blaming him for disappearing at times in the fourth quarter, given he averaged 43.0 minutes per game -- tied with LeBron James for the most of any player.

Shelburne: The same guy who was the most valuable player in the regular season -- Stephen Curry. His shot in Game 3 against the Pelicans is going to go down in playoff lore, but his play that entire series was sublime. The Pelicans gave the Warriors a decent fight, despite the sweep. But Curry just makes that team special.

Strauss: Curry. Not only did he hit the most memorable shot of the round, he dictated much of the rebounding in his series. That's a counterintuitive outcome considering Curry's size, but it happened. The Pels elected to switch larger players onto Curry, pulling their best rebounders from the paint. In Curry's floor time, the Warriors claimed 34 percent of possible offensive rebounds. When he was sitting, they got 18.9 percent of their misses.