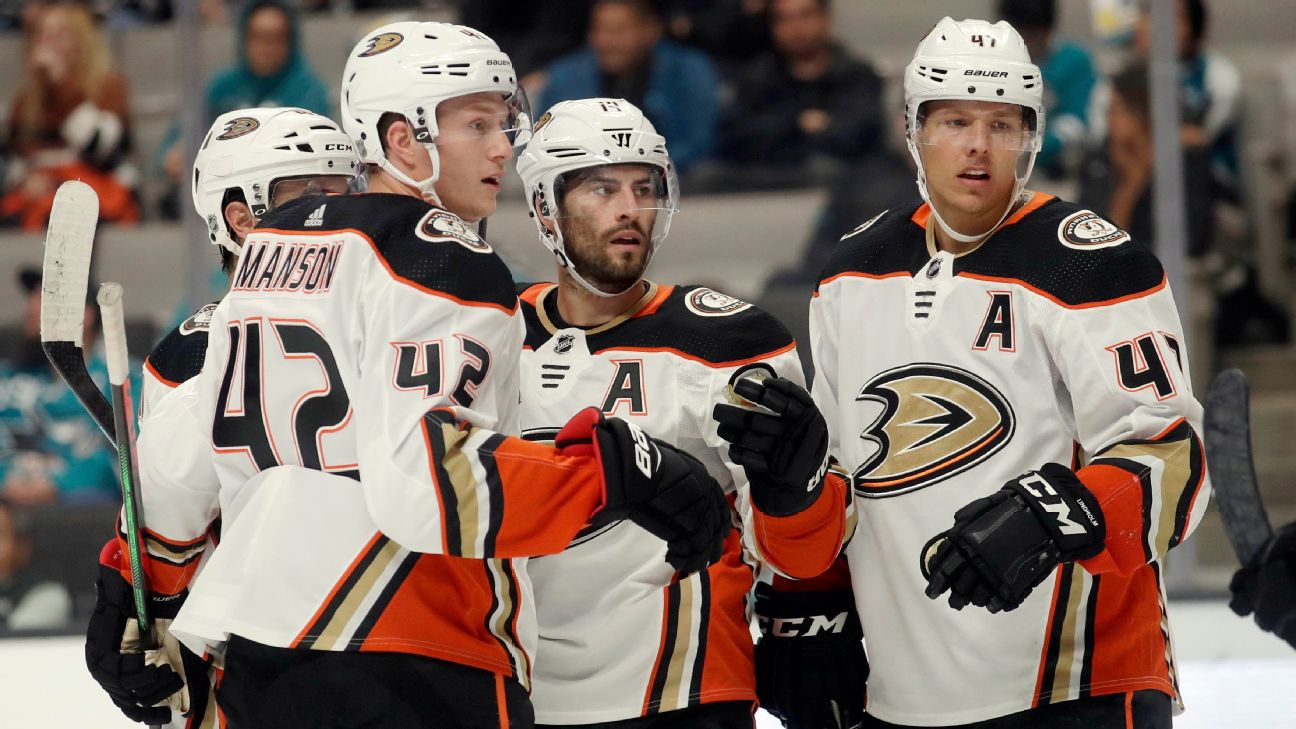 Dallas Eakins was tabbed to take over behind the bench for the Anaheim Ducks. Can he get this team back to contention quickly? Here's everything you need to know about the the Ducks heading into the 2019-20 NHL season:

The big question: Was coaching the problem?

Dallas Eakins has one key advantage in taking over the Ducks as head coach, in that he's not Randy Carlyle. GM Bob Murray let his beleaguered coach linger behind the bench far too long, as an injury-plagued Ducks team lurched to a 21-26-9 record before his dismissal. Eakins was promoted after a few strong seasons with the AHL San Diego Gulls, and many of the players on the roster have already played for him, which is always an advantage.

Can he and assistant coach Darryl Sutter -- still getting used to that, by the way -- find a way to meld the team's returning veterans like Ryan Getzlaf, Adam Henrique, Jakob Silfverberg and Rickard Rakell with their younger forwards? Is the talented blue line plus goalie John Gibson a sturdy foundation on which to build a contender this season? Or is this a franchise in transition?

The fate of three veteran players came to define the Ducks' offseason. The team bought out the remaining two seasons of Hart Trophy winning winger Corey Perry, the franchise leader in games played (988) and second highest goal scorer (372). "This is one of the most difficult decisions I've had to make in my 44 years in the NHL," said Murray, who watched Perry sign with the conference rival Dallas Stars. Meanwhile, forwards Patrick Eaves and Ryan Kesler will miss the entirety of the 2019-20 season. Eaves has a muscle disease that cost him all but nine games in the last two seasons. Kesler underwent hip resurfacing surgery in May, and is taking a year to work back. He's signed through 2022.

As for the rest of the offseason, the Ducks made some smaller moves -- trading for forward Nicolas Deslauriers, signing defenseman Michael Del Zotto -- but saw Hurricanes defenseman Justin Faulk nix a trade that would have sent forward Ondrej Kase to Carolina. The Ducks have over $9 million in cap space.

Kase responds to being placed on the trading block by finally staying healthy, playing 75 games and setting a new career high for points.

Eakins has been giving the 21-year-old center some choice linemates during the preseason after 11 points in 22 games in his first NHL campaign. The reviews so far have been positive.

John Gibson. Randy Carlyle should cut him a personal check for keeping him in a job longer than the should have been, as the 26-year-old goalie propped up a porous Ducks defense. His standard stats (.917 save percentage, 2.84 goals-against average) weren't mind-blowing, but he was second in the NHL in goals saved above average (37.6) and wins above average (6.6).

Fragility. Eaves and Kesler aside, the Ducks simply could not stay healthy last season, with only three players appearing in more than 70 games. Ryan Getzlaf has been banged up in consecutive seasons. Same with Kase and defenseman Cam Fowler. Maybe there's something here for Eakins to diagnose. Or maybe it's just Duck luck, or lack thereof.

This is clearly a team that has some work to do, as the prospects (No. 10) were the only category among the top third of the league. The NHL roster (No. 26), cap/contracts (No. 17) and owner/GM/coach (No. 21) lagged well behind.

Thus begins the Dallas Eakins era in Anaheim. Replacing GM Bob Murray, who took over for Randy Carlyle midseason, the former Oilers' head coach is focused on encouraging his charges to take greater risks on offense. This should result in a much-needed scoring boost, after the Ducks finished with 2.39 goals per game in 2018-19. Standing to benefit up front are Rickard Rakell, Jakob Silfverberg, Ondrej Kase, Troy Terry and rookie Sam Steel, who's projected to line up behind top center Ryan Getzlaf.

Even if he doesn't fully ignite the scoresheet, Maxime Comtois can still be expected to bang and badger his way through his first full campaign. Through last season's 10-game audition, Comptois racked up seven points and 27 hits, and there's a chance he could earn a spot in the Ducks' top six. This 20-year-old must be considered in any fantasy league that rewards rough-and-tumble categories along with scoring.