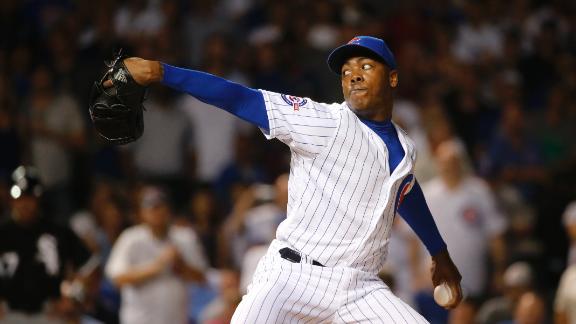 CHICAGO -- Aroldis Chapmanwasn't thrilled at the opportunity to address the media after an electrifying debut as the Cubs' closer on Wednesday night.

A day after a less-than-engaging session with reporters in his first day with his new team,Chapman initially refused to speak with the media after throwing 12 of 13 fastballs over 100 mph in the ninth inning of a pull-away, 8-1 win over theChicago White Sox.

At first telling the Cubs' public-relations staff he wasn't talking to the media and declining to speak to reporters at his locker, Chapman changed his mind after taking a shower.

"The adrenaline was pretty good even though it wasn't a save situation," Chapman said in Spanish as translated through catcher Miguel Montero. "It was fun to hear the crowd cheer for me."

Chapman had a rocky first day with the team as he wasn't engaging with reporters in answering serious questions about his past, which included a suspension under baseball's domestic violence policy.

On Wednesday, he expounded in an on-the-field postgame interview with ESPN's Pedro Gomez in Spanish but then refused to talk before changing his mind with the help of Cubs public relations.

"It's over with," Chapman said of the Tuesday news conference. "I have to move on. It happened."

Chapman struck out two of three batters in a 1-2-3 inning including Avisail Garcia looking for the final out. That fastball registered at 103 mph.

"I'm not impressed," winning pitcher Jason Hammel joked. "I thought we were getting the guy that was throwing 105. He only hit 103."

Chapman began warming up while the Cubs were leading 3-1. But a five-run eighth inning changed the dynamic of the game.

Without a save situation at hand manager Joe Maddon pitched Chapman anyway as he hadn't thrown since Saturday for the New York Yankees.

A sold-out Wrigley Field crowd acknowledged Chapman's jog in from the bullpen and were on the edge of their seats for every pitch.

"It's just entertaining to watch the (radar) gun," Maddon said. "He's a different kind of a pitcher. You see that every 100 years or so."

The Cubs traded four players for Chapman who immediately took over the closer's role. Former closer Hector Rondon pitched a 1-2-3 eighth inning on Wednesday before handing the game over to Chapman.