As Yasiel Puig struggles in the NLCS, how can Dodgers keep him engaged? 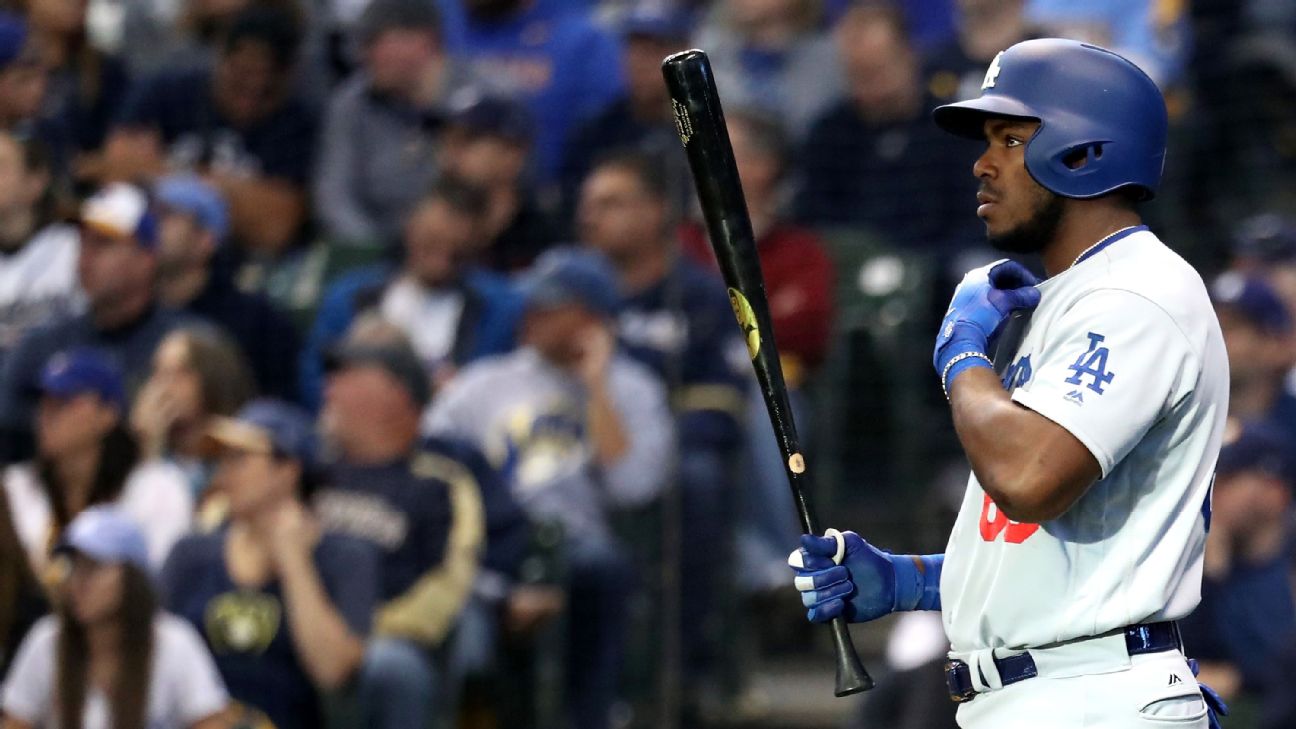 MILWAUKEE -- The ritual that defines Yasiel Puig and Turner Ward began on a routine afternoon in 2017, when Puig walked into the clubhouse in a noticeably foul mood.

"Come here," Ward said. "I want to tell you something."

Puig leaned over, and Ward, then in his second year as the Los Angeles Dodgers' hitting coach, planted a kiss firmly on his cheek, eliciting a smile. Days after that, Puig cranked his 20th home run at Citi Field and found Ward leaning unsuspectingly against the dugout railing. He leaped in from behind, wrapped his left arm around Ward's neck and kissed him repeatedly on the right side of his face, breeding a tradition.

Ward, a devout Christian from Alabama, and Puig, a boisterous outfielder from Cuba, have since fostered one of baseball's unlikely bonds despite their age, language and cultural differences.

"I love that guy," Ward said in the buildup to this National League Championship Series, now knotted at one game apiece as it shifts to L.A. "It's been incredible watching him grow, watching him become more of a complete player."

Their bond began in the spring of 2016, after an injury-riddled season limited Puig to only 79 games. Ward listened to the painful story of Puig's defection, got emotional over it and says he made it his mission to help guide him. He showed Puig genuine affection, vowed unwavering honesty and asked, in exchange, for transparency.

After tough times -- like Saturday afternoon, an 0-for-4 game punctuated by a broken bat -- Ward is the man Puig turns to. They badger each other constantly but oftentimes find themselves engaged in deeper conversations about spirituality and relationships.

Few comprehend the gift and the curse of Puig's exuberance the way Ward does. Even fewer understand what's hidden underneath it all.

"A lot of times he can't really express how much he really cares about people and teammates," Ward said. "I think teammates sometimes in the past would've thought he doesn't care. But sometimes, because he wants to succeed so well, he feels like he lets people down. He really wants to play well. He loves the fans -- of course, everybody sees that. But I think the care -- people don't get to see a whole lot of it."

Puig has been unable to match the production of his first two seasons, when he batted .305/.386/.502 with Gold Glove-caliber defense and game-changing speed from 2013 to 2014. He has settled into an above-average hitter who can intermittently affect games with his energy and his arm, contributing a .264/.334/.470 slash line with 5.7 wins above replacement in 381 games over these past three years.

He adjusted to repeatedly getting pounded inside with fastballs and eventually found his swing again. Along the way, Ward said, Puig became a little bit more patient and a lot more studious.

Puig is 27 now, winding down his sixth season with the Dodgers. His major league career has been defined by the boisterous actions that elicit polarization -- the flipped bat, the wagged tongue, the unsuspecting smooch -- but Puig is hell-bent on maintaining his persona.

"I have to be me," Puig said in Spanish. "When I try to be somebody else, it doesn't go well for me."

And so Dave Roberts, in his third year as the Dodgers' manager, is tasked with the intricate balance of allowing Puig to play freely while making sure he doesn't do so recklessly.

"I can't make him try to be Justin Turner or Chase Utley," Roberts said, "but what I can do is make sure he prepares and he's accountable for his actions and his teammates. We've had some difficult conversations, but I do believe he trusts that I have his best interest, our team's best interest."

One of those conversations took place during Game 2 of the NL Division Series, after Puig, running on his own, was thrown out on an awkward delayed steal with one out and a three-run lead in the sixth inning.

A day later, Roberts spoke to the team's beat reporters and summarized the situation this way: "Yasiel is just one of those guys that's so emotional, and he has a hard time at times letting the game come to him. He tries to, at times, impose his will on the game, and it gets him into trouble."

The two still seem to be figuring this whole thing out.

"I try to take in the things he tells me as much as possible," Puig said. "But I have to keep doing the things I like to do because I can't play passive the way he would want me to, or the way other people would want me to. So, I do my thing. Some people get bothered by it; sometimes they decide not to put me in the lineup. Whatever. I just wait for my moment and try to give the best of me each day."

Puig, burdened by reverse platoon splits, hates the infrequent playing time that comes with sitting against most opposing lefties. He believes he gets criticized only when his aggression leads to bad results, and that bothers him too. But he tries his best to shove it aside because what lies in front of him is so important.

This playoff run, however long it lasts, could really be Puig's last ride with the Dodgers. He has found himself in constant trade speculation over the years -- most notably in a potential deal for Brewers outfielder Ryan Braun -- and hasn't been shipped anywhere. But top prospect Alex Verdugo is waiting in the wings, and Bryce Harper will soon become a free agent, and this might actually be the offseason when Puig gets traded.

"Every time I start thinking about whether they're going to trade me, or if I'm going to be on this team or not, things don't turn out the way I would like [on the field]," Puig said. "So now it doesn't matter either way, whether they trade me or they don't trade me. I just came here to play baseball. I never thought I'd be on this team when I left Cuba; never thought I'd be a star or anything on this team or for the great city of Los Angeles. God gave that to me, and God can take that away. I just do the best I can, try to give my best. If the Dodgers don't keep me, there are 29 other teams. If nobody takes me, well, we'll see. That's life."

Puig laughed when asked how he has evolved since arriving with the Dodgers. He said he is "better in some areas, worse in others," which speaks to his mercurial nature.

Puig will sometimes go on runs when he almost seems to carry the Dodgers' offense, such as that two-game, five-homer stretch from St. Louis that nearly earned him a kiss on the mouth from Ward. But then he'll airmail a cutoff man, or round a base too aggressively, or run at times when he shouldn't, evoking outrage.

Ward, who believes that Puig's antics are often "misunderstood," learned last year that the player likes a good challenge. So he came up with an assortment of what are basically mini contests throughout the schedule to keep him motivated. (One example, according to Ward: "I bet you can't get that runner in from third seven out of 10 times.")

Puig once turned to Ward and said, "You're not a hitting coach -- you're a psychologist."

Ward smiled at the thought.

"That's the best compliment he could ever give me."