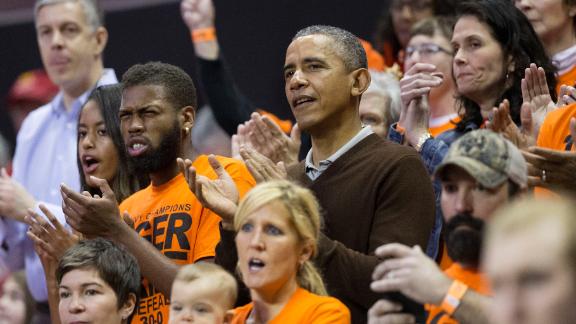 COLLEGE PARK, Md. -- President Barack Obama and his oldest daughter Malia attended Saturday's first-round NCAA tournament game between eighth-seeded Princeton and ninth-seeded Green Bay at the Xfinity Center on the campus of the University of Maryland.

Princeton freshman Leslie Robinson, a reserve forward for the only undefeated team in the women's tournament, is the president's niece. Robinson's father Craig, the former men's basketball coach at Oregon State and Michelle Obama's brother, also was in attendance, as well as the president's mother-in-law and other members of the family.

The president took his seat with about five minutes remaining in warm-ups, sitting several rows up from the floor and behind the Princeton bench amid a group of orange-clad fans.

The First Lady, who was in Japan this past week and was not in attendance Saturday morning, previously attended Princeton's game against American University in Washington, D.C., on Nov. 24, 2014. The Princeton team visited the White House on that trip to the nation's capital.

This was not the first time in recent memory that members of the administration attended the women's tournament.

Vice President Joe Biden attended the 2010 national championship game between Connecticut and Stanford in San Antonio, as well as a 2013 second-round game at the University of Delaware, his home state, between that school and North Carolina.