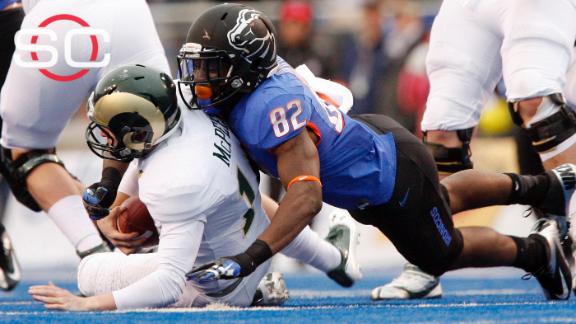 The woman who accused formerBaylordefensive end Sam Ukwuachu of raping her in 2013 has hired a law firm experienced in Title IX litigation to represent her in potential civil litigation.

On Friday, the woman, a former Baylor soccer player, hired John Clune and Chris Ford of Hutchinson Black and Cook of Denver. The firm also represents Erica Kinsman, the woman who accused formerFlorida State Seminolesquarterback Jameis Winston of sexually assaulting her in 2012.

Ukwuachu, who transferred from Boise State to Baylor in 2013, was convicted of sexual assault on Aug. 21 by a jury at Texas District 54 Court in Waco. Judge Matt Johnson sentenced him to 180 days in county jail, 10 years of felony probation and 400 hours of community service.

"At the request of the victim and her parents, our firm has been retained to investigate a number of issues surrounding this case," Clune said in a statement. "We are glad to see that President [Ken] Starr and Baylor have chosen to conduct their own investigation and look forward to learning the outcome of that process. Regardless of what facts these investigations may bare, there is a significant teachable moment here for all in higher education and we are hopeful that Baylor University embraces that great opportunity."

After Ukuachu's conviction, Starr, Baylor's president, called for a "comprehensive internal inquiry into the circumstances associated with the case and the conduct of the offices involved." The review will be led by Baylor law professor Jeremy Counseller, who is a faculty athletic representative to the Big 12 and NCAA and a former assistant criminal district attorney.

Starr released a statement Friday, with respect to the university's internal inquiry and next steps.

"After reviewing the results of his internal inquiry, I am recommending that our Board of Regents retain the services of outside counsel to investigate thoroughly these matters and recommend continued improvements," he said. "The Board plans to announce its selection of outside counsel early next week.

"In addition, I am creating a unique position, housed in the Division of Athletics, that has the authority and oversight of all student-athlete behavior. This officer-level position will report directly to the President and ensure our student-athletes maintain the high level of personal ethics and integrity that Baylor Nation demands. I will work directly with the Board of Regents to formulate the specific responsibilities of this position."

Ukwuachu transferred to Baylor after being dismissed by then-Boise State coach Chris Petersen in 2013. Ukwuachu's former girlfriend testified during his trial that he struck and choked her while he was attending Boise State; she testified she never told police or university officials about the abuse. Boise State officials said they were unaware of the woman's assertions, and the school opened a Title IX investigation into the incident, even though neither is still a student there.

Earlier this month, Clune settled a case with the University of Oregon after a student said she was gang-raped by three former Ducks basketball players. As part of the agreement, the school agreed to pay the woman $800,000 and provide free tuition, housing and student fees to end her lawsuit against the school.

Winston, the 2013 Heisman Trophy winner and No. 1 pick of theTampa Bay Buccaneersin this year's NFL draft, was never criminally charged and wasn't charged after a student conduct hearing. The woman sued Florida State andWinston in federal court in April, alleging he sexually assaulted her in his off-campus apartment. Winston's lawyers countersued the woman, saying she defamed him and damaged his potential for endorsement income.