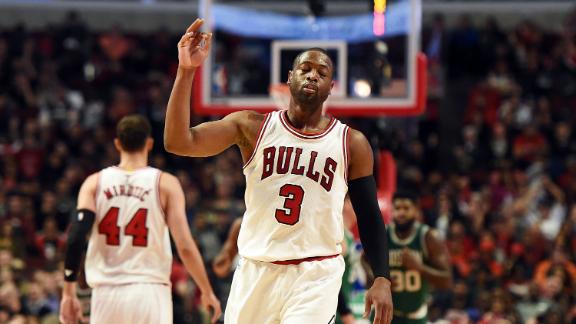 CHICAGO -- Dwyane Wade tweeted an apology Friday for making a throat-slash gesture at the end of the Chicago Bulls' 105-99 win over the Boston Celtics on Thursday.

Wade was fined $25,000 by the NBA on Friday for the gesture, which he made after making a game-clinching 3-pointer with 26.3 seconds left that gave the Bulls a lead they would not relinquish. He admitted after the game that he "had an out-of-body experience" after hitting the 3 in his Bulls debut.

Since signing with the Bulls over the summer, Wade has spoken publicly many times about trying to cut down the violence within Chicago.

Wade, 34, did not address reporters after Friday's practice. Bulls coach Fred Hoiberg said that Wade didn't do much in practice as the Bulls try to keep him healthy for the long grind of the NBA season.