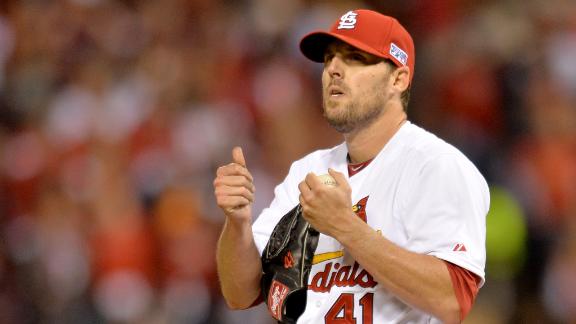 SAN FRANCISCO -- The St. Louis Cardinals plan for now to keep catcher Yadier Molina on their active roster despite a strained left oblique muscle sustained in Game 2 of the NL Championship Series.

Molina flew on the team charter to the Bay Area on Sunday night after leaving Busch Stadium for an MRI exam. After the team arrived at AT&T Park on Monday, Molina met with team doctors and medical staff in the training room of the visitors' clubhouse.

Manager Mike Matheny was encouraged Molina was able to throw Monday, though he did not swing the bat.

"I didn't think there was any possibility, having that injury myself," Matheny said. "It's just great having him with us in any capacity."

Molina said though he was in pain when he woke up, he got treatment, which consisted of ice and medication, and that he was "moving a little better."

"It's like somebody nails you with a knife," Molina said of the injury. "It's a tough thing."

Molina said if he can't be in the starting lineup he hoped he could be ready from the bench.

The Cardinals, who tied the series 1-1 with a 5-4 win Sunday, carried three catchers and have Tony Cruz and A.J. Pierzynski to fill the void, if needed. Matheny wouldn't announce his starting catcher for Game 3 on Tuesday, and hopes to be able to use Molina at the least off the bench -- hinting he would be unlikely to start. Molina will continue to be examined by the medical staff.

Game 3 starter John Lackey worked with Pierzynski during their time together in Boston earlier this year.

"When you lose a guy of his caliber, there's always going to be a hole for sure," Lackey said. "A.J. and I are good. Obviously I pitched to him a bunch in Boston this year."

Matheny said Molina can contribute in so many ways, even if he doesn't get back on the field.

"Obviously it's a big loss, but we spent some time without him this year and we're fortunate to have A.J. and Tony, who are two really good players," infielder Mark Ellis said. "We're lucky to have them but I feel bad for Yadi because this is what he worked for the whole year and he's not able to be with us."

Information from The Associated Press and ESPN.com senior writer Jayson Stark was used in this report.