Chargers' Keenan Allen done for season due to lacerated kidney 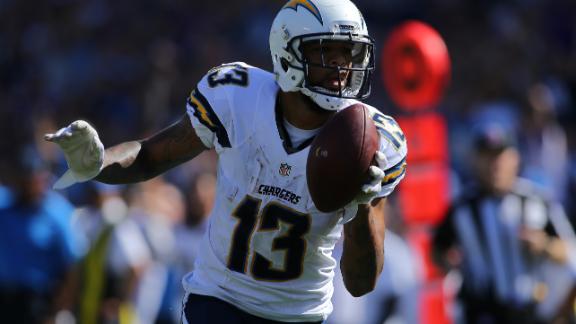 He will make a full recovery in approximately six weeks, but with the Chargers (2-6) out of playoff contention, the team opted to place him on season-ending IR, sources said.

Allen was hurt hauling in a 13-yard reception for a score. He came down awkwardly on his back and remained on the field for several minutes while trainers attended to him. He then got up and was helped to the locker room.

In his third season, Allen was on pace for a historic year, statistically. Through eight games, the 23-year-old had 67 receptions for 725 yards and four touchdowns.

With 67 catches, Allen was tied for the second-most receptions in NFL history through the first eight games.

Allen led all rookies in 2013 and set a team record with 1,046 receiving yards and 71 catches during the regular season. He was just the fifth rookie since 2000 to eclipse 1,000 receiving yards.

He finished 2014 with 77 catches for 783 yards and four touchdowns. Allen missed the final two games of last season with a broken collarbone and an ankle injury.

Information from ESPN's Adam Schefter and Ed Werder was used in this report.