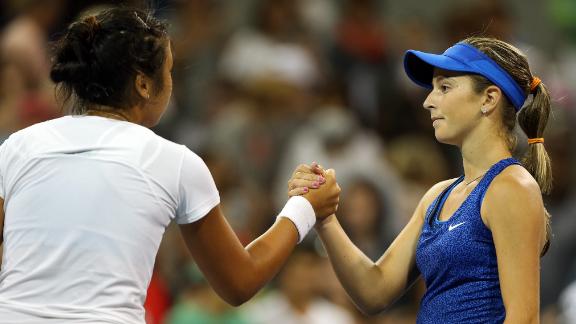 NEW YORK -- American teen CiCi Bellis fought back after losing the first set, but ultimately came up short in her second round match Thursday night at the US Open.

Bellis, a Californian who is ranked 1,208th and playing in her first tour-level event, won seven games in a row during one stretch.

"Maybe it didn't turn out how I wanted it to, but thank you, everybody, for coming out and watching," Bellis told the overflowing and wildly supportive crowd in an on-court interview. "It was amazing. I mean, I never thought I'd be here."

Bellis earned a wild-card invitation from the U.S. Tennis Association by winning the USTA Girls' 18s National Championship, the youngest to do since Lindsay Davenport also won it at 15 in 1991.

On Tuesday, Bellis grabbed headlines by surprisingly eliminating 12th-seeded Dominika Cibulkova, the runner-up at the Australian Open in January. That made the home-schooled Bellis the youngest player to win in New York since Anna Kournikova, 18 years ago.

It also made her the sort of made-in-a-minute modern star who collects Twitter followers by the thousands and can't walk far without having items thrust at her for autographs.

"What surprised me," Bellis said, "is that I could really, like, stay with these pros."

Playing Thursday under the lights in front of an audience that chanted her name at 2,800-seat Court 17, and with the match broadcast live on ESPN2, Bellis did not start well.

Heaving deep breaths before hitting serves, she got broken at love to fall behind 2-0 right away.

"I think in the beginning of the match I was, you know, nervous and I was a little tight," she said. "Then the second set I became freer. Third set, I mean, she just kind of played better than me. I wasn't playing as well as I would have liked to, but it was a really good experience, I think."

She was broken at love again to trail 5-3, and dropped that first set.

But Bellis began playing more steadily as the match went on, and after her shutout in the second set, she went up 1-0 in the third.

That, though, is where things began to unravel.

Bellis double-faulted to get broken and fall behind 2-1 in the final set, and started exhibiting some negative energy, yelling at herself and dropping her racket to the court.

At one point, she asked herself: "How many errors are you making?"

Later, she appeared to hurt her left leg on a stumble, then sat in her changeover chair and clutched at that calf.

Diyas is only 20 years old, but that makes her a veteran by comparison. This was her 10th Grand Slam match, including a fourth-round run at Wimbledon.

"I'm very proud," said Leo Azevedo, a USTA coach who works with Bellis. "She did very well. I don't think Diyas can play any better."

Bellis had a lot to take away from her first tour-level tournament.

"This whole experience has been unbelievable, like mind-blowing," the teen said. "It's been crazy. It's been like the best couple days of my life."

After all, she's still young enough that she is entered in next week's junior tournament in New York.

Earlier Thursday, good as she is, even Serena Williams found it tough to deal with swirling wind, so much so that she double-faulted three times in her first service game.

And, yes, even a 17-time major champion such as Williams can lose in the early going at the sport's biggest tournaments, as she has repeatedly in 2014.

Quickly putting behind a poor-serving start, and showing absolutely no other signs of the type of up-and-down play that has plagued her at Grand Slams this season, Williams dismissed 81st-ranked American Vania King 6-1, 6-0 in 56 minutes to reach the third round.

"She never let me in," said King, who is 25. "She's played at such a high level for so long, and I used to watch when I was a kid, growing up. So it's kind of surreal to see the person that you've been watching on TV in front of you and playing. It was difficult."

Williams ran her US Open winning streak to 16 matches as she tries to become the first woman to win three consecutive titles at Flushing Meadows since Chris Evert took four in a row from 1975 to '78. Five of Williams' 17 Grand Slam singles titles have come at the US Open, including in 2012 and '13.

Once her initial problems adjusting to strong wind in Arthur Ashe Stadium were resolved, Williams compiled a 25-5 edge in winners.

For the moment, the 32-year-old Williams wants to stay focused on avoiding the sort of problems she had at the Australian Open (where she lost in the fourth round), French Open (second round) and Wimbledon (third round). Not since 2006 has she failed to reach at least one major final in a year -- and she only entered two Slams that season.

"You always hear about who is winning, who is losing. You hear about upsets. But for me, especially lately, I have to worry about my first round, my second round, and my third round. I can't get too far ahead of myself," Williams said.

"I was a casualty before, so ... I can't make anything of it," she said of the rash of seeded losers. "At this point, I'm trying to stay alive."

So far this week, she's left the trouble to others, and Williams could wind up being the beneficiary. A pair of other past major champions, No. 8 Ana Ivanovic and No. 24 Sam Stosur, lost Thursday, as did No. 23 Anastasia Pavlyuchenkova and No. 27 Madison Keys, bringing the total to 11 seeded women gone after only two rounds.

Ivanovic, who had been having her best season since winning the French Open in 2008, lost to Karolina Pliskova 7-5, 6-4.

Ivanovic, seeded eighth, had won 47 matches coming into Flushing Meadows, the most of any woman on the tour this year. But she never found her rhythm against Pliskova, a 6-foot-1, big-hitting Czech ranked No. 42. Ivanovic struggled to consistently make her first serves and sprayed 29 unforced errors, including seven double faults.

"It was just (a) really bad day," said Ivanovic, who was once ranked No. 1 and whose three titles this season equal the career high she set in 2008.

But she hasn't matched that success in Grand Slam tournaments. She made the quarterfinals of the Australian Open but fell in early rounds at Roland Garros and Wimbledon.

"This is exactly what I think I have to reassess," she said. "I had great lead-ups to every Grand Slam. I played a lot of matches and won lot of matches. ... At the Grand Slams I just haven't performed that well."

Ivanovic is the highest seed to fall behind No. 4 Agnieszka Radwanska, who lost to Peng Shuai in the second round Wednesday.

After celebrating the biggest victory of her career, the 22-year-old Pliskova said she didn't really have a strategy for attacking Ivanovic.

"I just played my game and was focusing on me," she said.

The seventh-seeded Bouchard was the only woman to reach the semifinals at the year's first three Grand Slam tournaments. She lost in that round at the Australian Open and French Open, before her run at the All England Club made her the first Canadian tennis player to reach a major final.

Bouchard made her US Open debut in 2013, exiting in the second round.

To get to the fourth round this year, she will need to beat 30th-seeded Barbora Zahlavova Strycova.

If Bouchard makes it to the quarterfinals, she could face No. 3 Petra Kvitova in a rematch of the Wimbledon final.

Stosur, who won the 2011 US Open title, holds the distinction as the last woman to beat Serena Williams at Flushing Meadows.

No. 16-seeded Victoria Azarenka, a finalist at the US Open the past two years, dropped the first three games before coming back to beat 44th-ranked American Christina McHale 6-3, 6-2 in another second-round match.

Azarenka, a two-time Australian Open champion who once held the No. 1 ranking, has been hampered by injuries, including one to her left foot that kept her out for much of the season and a knee problem that led her to pull out of the tuneup event in Cincinnati.

Bellis Out In Second Round
Zarina Diyaz beat CiCi Bellis 6-3, 0-6, 6-2 to advance to the third round at the US Open.

CiCi On US Open Run
CiCi Bellis discusses her second-round loss to Zarina Diyas, how much winning her first-round match over Dominika Cibulkova meant to her and the reception she's received since.

Ivanovic Bounced In Second Round
Karolina Pliskova beat Ana Ivanovic in straight sets to advance to the third round at the US Open.

Serena Rolls
Serena Williams beat Vania King 6-1,6-0 to advance to the third round at the US Open.