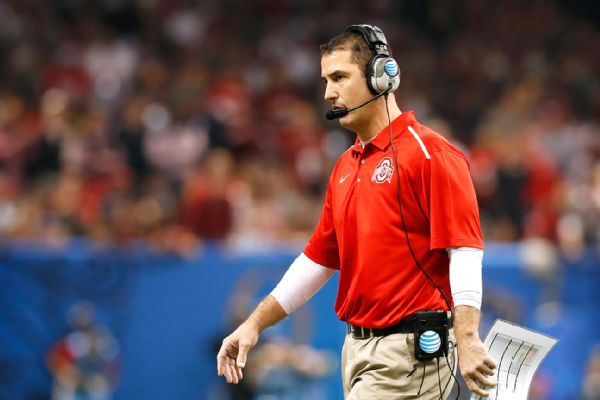 The Cincinnati Bearcats have hiredOhio Statedefensive coordinator Luke Fickell as their next head coach, the school announced Saturday.

Fickell and the school reached agreement on a six-year deal late Friday night. The contract is pending approval from Cincinnati's board of trustees during a special meeting Sunday.

"It's with much pride and humility that I accept the awesome honor of becoming the head coach at the University of Cincinnati," Fickell, 43, said in a statement. "This city, this school and my family are all Ohio. It's a tough blue-collar state with hard-working, blue-collar people that respect an honest and complete effort. That's what they will get from me personally and what they should expect from this football program."

Fickell replaces Tommy Tuberville, who resigned after going 4-8 in his fourth season and 29-22 overall at Cincinnati. Fickell interviewed with Cincinnati athletic director Mike Bohn on Thursday.

Fickell will remain with No. 3 Ohio State for the remainder of the season, starting with the Buckeyes' upcoming matchup with No. 2 Clemson in the College Football Playoff semifinal at the PlayStation Fiesta Bowl.

"We targeted a number of criteria we wanted in our head football coach and we were looking for the coach who was the best fit for our program, our University and our community and we have found that leader in Luke Fickell," Bohn said in a statement. "His extensive ties to the state of Ohio, experience at a championship-level program in Ohio State, ability to evaluate and develop talent, energy and leadership are all qualities which set him apart.

"Above all else, he's a model of integrity and a great family man and we look forward to partnering with him to continue to build upon our winning tradition."

Fickell's biggest challenge will be to fix Cincinnati's issues on offense. The Bearcats' scoring offense (19.3 points per game) ranks 120th out of 128 FBS schools this season.

A Columbus native and former Ohio State defensive lineman, Fickell has coached at his alma mater since 2002, serving as Buckeyes defensive coordinator in some capacity in all but one season since 2005. He also coaches Ohio State's linebackers.

Fickell was Ohio State's head coach during the 2011 season following the Memorial Day resignation of Jim Tressel amid an NCAA investigation. Ohio State went 6-7 that season and then hired Urban Meyer. Fickell interviewed for the head-coaching vacancy at Pitt before remaining with the Buckeyes as co-defensive coordinator.

"Today is a proud day for Ohio State and Buckeye Nation with the news of Luke Fickell becoming head coach at the University of Cincinnati," Meyer said Saturday via statement. "Few have invested as much time and effort and passion into Ohio State and its football program than Luke. We all knew this day was coming. Now that it is upon us, I want to thank Luke for being such a terrific coach, mentor and person. And I wish him, Amy and their young family all the best as they begin this new journey."

Sources say Cincinnati also had targeted Jeff Brohm and P.J. Fleck for its opening. Brohm opted to leave Western Kentucky for Purdue, and Fleck didn't have interest in the Cincinnati job and likely will remain at Western Michigan, where he's expected to receive a restructured contract.