Corey Perry, Mike Fisher among key players feeling the heat to step up in pivotal Game 4 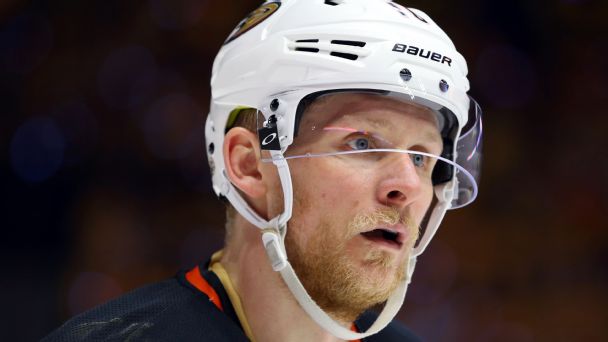 Game 4 of the Western Conference finals is on deck at Bridgestone Arena, where the Nashville Predators might have turned the corner on the Anaheim Ducks for celebrity sightings at home games.
The Preds have mounted a 2-1 series lead thanks to their 10th straight home playoff win. Celebs from the country music world, the NFL and even actress Nicole Kidman have been on hand at the Music City madhouse.

On the ice, there are key figures as well, including four players who could step up to make the difference for their side in Game 4 and earn themselves a different kind of fame.

Perry scored the Ducks' lone goal in Game 3, a bad-angle heave at the net that beat Pekka Rinne between the wickets. It was not a play that will go on Perry's highlight reel, although his two overtime winners earlier in the playoffs might. Perry has had arguably the worst season of his career, spending much of it on the third line and second power-play unit. That's unusual for a guy who averaged more than 35 goals over his previous eight full seasons, including a 50-goal campaign in which he won the Hart Trophy. The ennui in Perry's game goes beyond the stat sheet. He is not as engaged physically, and as a pest he has receded into the long shadow of Ryan Kesler. His struggles have stretched over months, so Perry needs to dig deep for a big game or to find a critical goal.

The Predators captain has been responsible defensively and has generated chances, but he and his line have been absent on offense. Fisher has an even plus/minus and no points in 13 playoff games despite averaging more than 17 minutes per game. He had just 14 shots in his first 11 playoff games but has added seven more in his past two games. Fisher has been bankable for about 20 goals per season, meaning he's due, but the Preds need his playmaking abilities most. His line has been largely unremarkable, as has the second power-play unit he centers with high-end talent Filip Forsberg, Ryan Ellis and P.K. Subban, who have all been outstanding at even strength. Forsberg and Ellis have 21 points combined but just three with the man advantage.

Like Fisher, Wilson has been part of both the second line and second power-play unit. He has two points in nine games, missing time with a lower-body injury. He is minus-4 and has been largely invisible, other than hitting a post in Game 2. Wilson is a talented, versatile player who is capable of playing wing or center and also excels off the rush and particularly at playing a power game in the offensive zone. Last season he had five points in the seven-game series between these two teams, and he had two goals in three regular-season meetings with Anaheim. Even if he doesn't score, the Predators could use a more physically engaged and aggressive Wilson.

Kesler has drawn attention for his tight checking and imaginative agitation, but he is losing the battle against Ryan Johansen--Kesler was on the ice for both Nashville goals in Game 3, and Johansen had four points combined in Games 1 and 2 -- while generating almost no offense. He is playing more than 20 minutes a night but has just a pedestrian secondary assist on Sami Vatanen's Game 2 power-play goal. Linemate Jakob Silfverberg has two goals in the series, but Kesler did not figure in either of them. Regardless of his effort or ability to irritate Johansen, who railed against him after Game 2, this is a results-based business. Kesler's line needs to keep Johansen's trio off the score sheet and provide secondary scoring for the Ducks, who were hapless offensively in Game 3.
Related topics:
sportsespnpostseasonnhlgame 4ryan keslermike fishernashville predators2017 stanley cup playoffsstanley cup playoffscorey perryanaheim duckscolin wilsonwestern conference
Copyright © 2022 ESPN Internet Ventures. All rights reserved.
TOP STORIES
Orange County confirms 1st presumptive case of monkeypox
Memorial service held for 2 slain El Monte police officers
4 SoCal cities forced to cancel 4th of July fireworks displays
Ex-UFC star Cain Velasquez sues man he claims molested his son
California late start law aims to make school less of a yawn
USC, UCLA considering move from Pac-12 to Big Ten as early as 2024
CA gas prices will be even more expensive starting Friday. Here's why
Show More
Supreme Court allows Biden to end Trump's 'Remain in Mexico' policy
Texas woman accused in cyclist death arrested in Costa Rica
Concealed-weapon permit applications on the rise in LA County
Jackson sworn in as 1st Black woman to sit on Supreme Court
14-year-old tiger dies after contracting COVID-19 at zoo
More TOP STORIES News