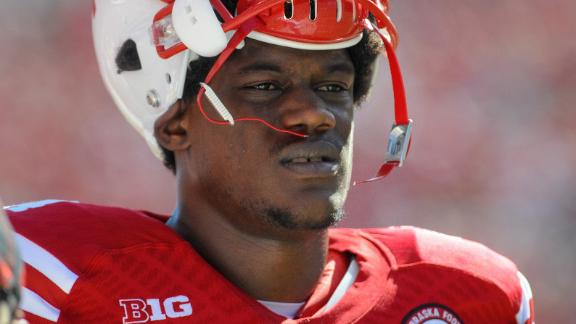 IRVING, Texas --Randy Gregory's slide in the draft stopped with the Dallas Cowboys.

The Cowboys took the Nebraska defensive end in the second round with the 60th overall pick Friday night. At the start of the draft process, Gregory was viewed as a top-10 pick, but a failed drug test at the NFL scouting combine and other concerns led to a precipitous fall.

"Obviously I was a little bit upset, but the thing is I put myself in this spot," Gregory said of handling the past few days. "I really did, and I fully understand that, and the big thing is moving on and learning from my mistakes. I definitely think I have. I know I have. I've done a lot of talking. I've been patient. I've done a lot of talking, meeting with a lot of guys, and I'm just ready to show it because I think everyone is ready for me to show it.

"I'm not tired of it, but I think everyone's heard enough from me from talking, and they're ready to see me on the field and off the field carrying myself the way I should. I'm ready to do that and show everybody."

Gregory said he spent 35 minutes with owner Jerry Jones in his pre-draft visit with the Cowboys and that the bulk of the discussion was about his off-field issues. He said coach Jason Garrett was "stern" with him in the meeting as well.

"I personally had some great visits with him," said Jones, who indicated Gregory was the top pass-rusher on the Cowboys' draft board. "The bottom line is we're comfortable with that pick, and if things work out, we've got a support system in place for a player of his caliber; that support system goes all the way to the top of our organization."

"We've got our arms around where he is," Garrett said of Gregory. "Clearly made a mistake at the combine. He's acknowledged that. One of the things that we really pride ourselves on is providing the environment for players to be their best."

Gregory acknowledged "bumps along the way." In addition to the failed drug test, he said he missed one flight for a pre-draft visit to another team and was unable to make it to two other teams because his schedule was full.

"I can't really go into too much detail, but I definitely will be working with Jerry Jones and the rest of the staff," Gregory said. "When I met them on my top-30 visit, that was one of the main things we talked about was support and how we could work together so that we can have success, me individually and us as a team. I think when I left I think we both kind of felt like we were on the same page together."

Representatives for Gregory made it clear that whichever team drafted him needed to have a support system in place that would be expected to include a security person and a personal handler who would follow Gregory at all times, sources told ESPN NFL Insider Adam Schefter.

The Cowboys have a history of taking chances on players with off-field problems, either legally (Adam Jones, Greg Hardy) or with mental health issues (Dimitrius Underwood, Alonzo Spellman).

Gregory was asked whether he has mental health issues.

"Not anything like that," Gregory said. "I think I have the same kind of anxieties that a lot of guys in my position have. After talking with the staff, I think they felt like they were comfortable enough to be able to support me in that way, and this is something that I've been working on for a while and felt like the best fit was Dallas, and I think they really agreed with that. I'm trying to be positive about it. I couldn't be more happier and I can't put it into words how I feel right now."

Gregory's college teammate, running backAmeer Abdullah,offered a positive take on his selection, telling reporters during a conference call, "He's an explosive player on the field. I think things are in perspective for him now, and I'm looking forward for him to continue to improve."

Asked to elaborate on what he meant by "perspective," Abdullah, aDetroit Lionsdraftee, said, "He's a guy who is very mindful. If something happens, he's going to think about it. I know what his intentions are heading into the league. I know Randy is a greatguy and I'm looking forward to seeing great things down in Dallas from him."

The Cowboys' stated goal in the draft was to improve the defense, and with their first two picks, they took cornerbackByron Jonesand Gregory, who had 17.5 sacks in two seasons at Nebraska.