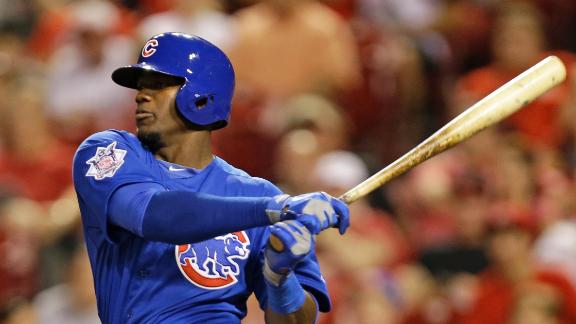 CINCINNATI -- Jorge Soler was reminded before playing in his first major league game Wednesday with the Chicago Cubs that his good buddy and teammate, second baseman Javier Baez, hit a home run in his MLB debut Aug. 5.

But he didn't wait as long as Baez, either.

Soler hit a home run in his first at-bat, giving the Chicago Cubs a 2-0 lead in a 7-5 Cubs loss to the Cincinnati Reds.

Indeed, if the 22-year-old right-fielder was nervous, he didn't show it.

Batting fifth in manager Rick Renteria's lineup and with his father, Jorge Soler Sr., among the 20,497 on hand at Great American Ball Park, Soler followed Luis Valbuena's leadoff home run in the second inning with a laser-beam line drive on a 2-1 fastball from Mat Latos that reached the netting stretched across the top of the Reds' bullpen in left-center field.

The shot was estimated to have traveled 423 feet.

Soler became the first Cubs player since Starlin Castro on May 7, 2010, also in Cincinnati, to hit a home run in his first major league at-bat.

"The first at-bat was real tense," Soler said. "But when I hit a home run, I was shocked about it."

Renteria said he saw the patient hitter he'd been expecting to see, as Soler took two pitches for balls and one for a strike before jumping on a two-seam fastball that Latos told reporters came back over the middle of the plate.

Soler, 2-for-4 with a run, two RBIs and one strikeout, drove in the final run of Chicago's three-run eighth inning that cut Cincinnati's lead to 6-5 before Chris Heisey led off the eighth with a pinch-hit homer.

"He looked very comfortable in the box, as we were told before he got here," Renteria said. "That was a well-struck ball. Good for him. Good work."