Dallas Keuchel, Bryce Harper among 7 to get qualifying offers 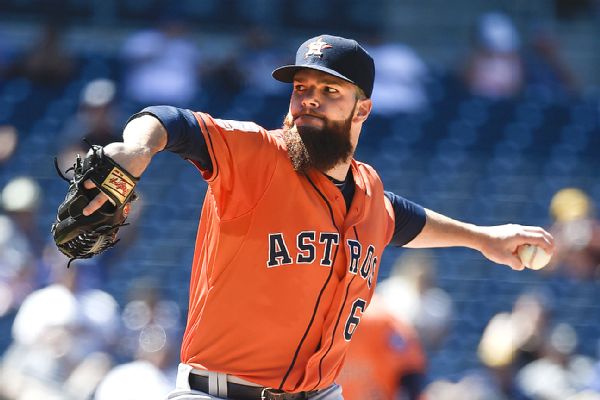 In six seasons, only five players have accepted the qualifying offers out of the 73 issued by major league teams.

The Astros, however, chose not to make offers to right-hander Charlie Morton or utilityman Marwin Gonzalez. Morton should be sought after in a pitching-hungry market. The right-hander was 15-3 with a 3.13 ERA in 30 regular-season starts.

"I've put everything into the Astros, so I fully expected to get one," Keuchel said, according to MLB.com. "I'm a little shocked Marwin and Charlie didn't get one. That's what they felt like, so we'll see within the next 10 days. I would assume we'll turn it down and look at other offers and figure out what's best."

Players rarely take the qualifying offer, but a team that makes a claim is entitled to a compensatory pick in the draft.

Before 2017, teams received a supplementary first-round pick, but the rules now take into account market size and payroll. If Keuchel signs with another team, the Astros will be awarded a supplementary pick after the second round. Because the Nationals are over the luxury tax, they would get a pick after the fourth round in compensation for Harper.

Top free agents prefer to seek multiyear contracts, but given the greater priority on draft picks in recent years, Ryu and Grandal might face a difficult market and consider accepting the offers.

A free agent can be made a qualifying offer only if he has been with the same team continuously since Opening Day and has never received a qualifying offer before. Manny Machado and Josh Donaldson were among the players who were ineligible to receive offers.

Harper and Machado are the top players available on the market, though Machado's value may have been damaged by a poor postseason in which he hit .227, showed a remarkable lack of hustle and was fined $10,000 for stepping on a first baseman's foot.

The Cleveland Indians are interested in re-signing Brantley but did not want to commit $17.9 million for one year.

"We could not have any more respect for any individual than we have for Michael," general manager Chris Antonetti said. "He's the guy that epitomizes, as I've shared before, all of the things we look for in a player. He's exceedingly productive on the field. He defines professionalism in the clubhouse, and he's an extraordinary teammate. The interest and desire is there. What we will have to work through is can we make the pieces fit?"