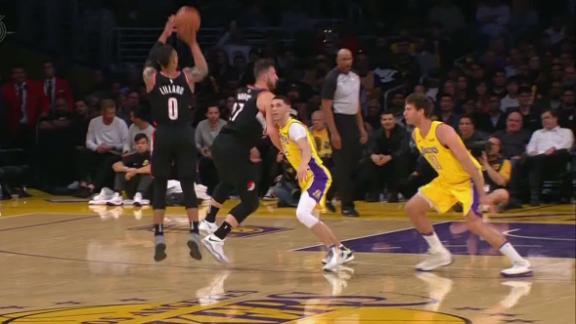 LOS ANGELES -- Damian Lillard looked up at the clock and saw the Lakers leading the Portland Trail Blazers by double digits in the fourth quarter.

He knew what time it was.

"I am about to try to take this on and bring it home," Lillard said afterward about what he was thinking as the Blazers mounted their comeback.

Portland's All-Star point guard gave the young Lakers a heavy dose of vintage Lillard Time, scoring 19 of his 39 points in the final seven minutes and 39 seconds. He buried four consecutive 3-pointers in less than two furious minutes to help the Blazers overcome an 11-point fourth-quarter deficit and stun the Lakers 108-103 at Staples Center.

Lillard's incredible finish included 15 straight points for the Blazers down the stretch.

"What he did in Phoenix, I wasn't so hyped," Napier added, referring to Lillard scoring 40, including the game-winning layup, against the Suns on Feb. 24. "But today I was just like, wow, [during] the game. He took one shot -- he came off the screen with a hand up and at least 10 feet behind that line, he let that go, and I was like, wow."

Lillard, who hit a 3-pointer with seven-tenths of a second left in the contest to beat the Lakers on Nov. 2 in Portland, left the Staples Center crowd in a buzz with his fourth-quarter fireworks. He overwhelmed the surging Lakers with his clutch play to extend Portland's winning streak to seven, while snapping the Lakers' five-game winning streak and nine-game home winning streak.

The win also gave Portland its 15th straight victory over the Lakers, a streak that began in April 2014. Only the Oklahoma City Thunder -- with an 18-game streak over the Philadelphia 76ers -- have a longer active run over another team.

Lillard assistedCJ McCollumon a 3 and hit two free throws before going on his 3-point barrage. First, he saw rookie Lonzo Ball backpedaling in transition and then drilled a 28-foot pull-up 3. Then came a 28-foot stepback 3, followed by a 29-footer and a 25-footer to give the Blazers (38-26) a 103-99 lead with 2:22 left.

"It will probably be a while before I miss, that is what I am [thinking]," said Lillard, who is averaging 33.8 points in his past 10 games, which started with a 50-point game at theSacramento Kingson Feb. 9. "Usually when I get on the road, I feel like every shot is going in. There have been times when it came down to a big shot, where I have been missing; but I think just knowing that I have taken these shots so many times, not only in games but in workouts, that I have been preparing myself.

"I expect things for myself. Regardless of how the game is going, I am always going to feel like when the time comes, I can make it happen."

Ball, who missed 15 games in January and February due to a sprained left MCL, banged his left knee but finished the game.

He shouldered the blame for Lillard's 3-point flurry Monday night.

"That's on me," said Ball, who finished with 10 points, two rebounds and two assists. "My matchup. The first [3-pointer], that's when he got hot; when he came down the court, I had my hands down."

The Lakers had their chances down the stretch. L.A. guardKentavious Caldwell-Pope missed two consecutive shots. After McCollum, an 86.4 percent free throw shooter, missed two foul shots with 7.7 seconds left, the Lakers still couldn't capitalize. GuardIsaiah Thomas (19 points and seven assists) missed a free throw, before later having the ball stripped out of his hands by Napier as he went up for a 3-point attempt.

"We got to close that one out," Ball said. "We were up like 10 with five minutes left and they took the game from us. Live and learn. Not the end of the world."