De'Andre Johnson apologizes for hitting woman, wishes he walked away 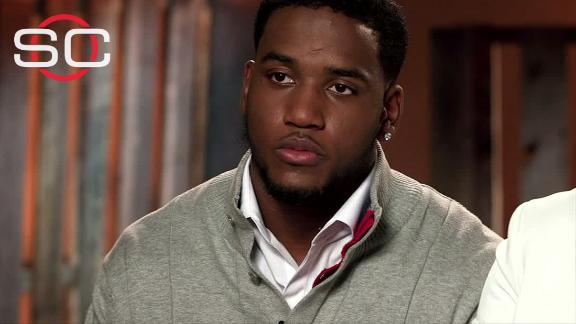 Former Florida State quarterback De'Andre Johnsonapologized for his actions in a confrontation with a woman last month that ultimately resulted in misdemeanor battery charges against the freshman and his dismissal from the Seminoles' football team.

Sitting with his mother, Pamela Jones, in an interview that aired Tuesday on ABC's "Good Morning America," Johnson said that he wished he walked away from the situation.

"Well, you're right. There is no explanation for that," he told interviewer Michael Strahan. "I totally should have walked away."

Johnson said it "kills" him inside to know that he hurt his mother, who he said didn't raise him like that. Jones said she cried for three days in light of the news.

Asked what her initial reaction was when the incident happened, Jones said: "I wanted to jump through the phone and wring his neck."

A freshman from Jacksonville, Florida, the 19-year-old Johnson was dismissed from the football team by Seminoles coach Jimbo Fisher on July 6, hours after the state's attorney's office released surveillance video of Johnson striking a 21-year-old woman June 24 in a bar in Tallahassee, Florida. Johnson is charged with misdemeanor battery.

Johnson said Tuesday on "Good Morning America" that he does not second-guess the program's decision to dismiss him, but he does feel he deserves a second chance. He declined to say whether he had been drinking the night of the incident.

Surveillance cameras inside the bar appeared to show Johnson punch a woman in the face while they argued. He pleaded not guilty on July 2 and has a case management conference in a Leon County court on July 22.

Johnson's attorney, Jose Baez, told NBC's "Today" on July 7 that his client punched the woman after she called him racial epithets and provoked him. Baez said Johnson was not the initial aggressor but is "owning this" and trying to learn from the experience.

Baez said Johnson accidentally made contact with her while they waited to order at the bar. Baez said Johnson tried to "de-escalate the situation," but the woman "kneed him in the groin area" and "took another swing before he retaliated."

Florida State president John E. Thrasher met with the school's football team and coaches Monday, telling them that playing football for FSU is a "privilege, not a right."

"In light of recent off-field incidents, I reiterated to our players that they simply cannot put themselves in situations that reflect poor behavior or cause harm to others," Thrasher said in the statement. "The actions of a few have the capacity to do serious damage to the reputation of our entire university. I told them their coaches, the Athletics administration and I will do all we can to support them and help them learn the values we expect them to uphold. But they will be held accountable for their actions."

Sophomore running back Dalvin Cook also was suspended this past week after he was charged with misdemeanor battery by the state attorney's office for allegedly punching a 21-year-old woman several times outside a bar in downtown Tallahassee on June 23.