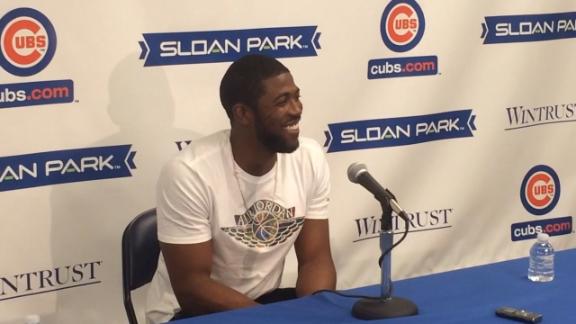 MESA, Ariz. -- The Chicago Cubs, in a shocking turn of events, re-signed center fielder Dexter Fowler to a one-year deal after trading outfielder Chris Coghlan to the Oakland Athletics on Thursday.

Fowler surprised his teammates with the announcement by walking onto the field in street clothes as the team performed spring drills. "With the social media these days, it's hard to keep something quiet," a smiling Fowler said afterward. "I owed it to the boys to tell them first."

The one-year deal, which came together late Wednesday when Fowler drove down from Las Vegas to take his physical, is for $8 million. It also includes a $9 million mutual option for 2017, which the Cubs can buy out for $5 million.

This is where my heart is,'' Fowler said.

The signing comes two days after Fowler had been linked to a deal with the Baltimore Orioles. ESPN and media reports had said Fowler and the Orioles had agreed to a three-year deal pending a physical.

Fowler said he had been negotiating with the Orioles, but "I didn't give them a verbal agreement at all."

Orioles executive vice president Dan Duquette said Fowler's insistence on a buyout clause was the main reason Baltimore's talks with the outfielder resulted in no deal.

"We made a very competitive offer," Duquette said, according to the Baltimore Sun. "There was not an agreement to terms because they kept insisting on an opt-out. I don't see [and] club ownership doesn't see the value in that type of arrangement to the Orioles. If we are going to guarantee a contract, it should be a contract."

"In my 25 years in this business, never before have I witnessed such irresponsible behavior on so many fronts,'' he said in a statement posted online. "Both the Orioles front office and members of the media were so busy recklessly spreading rumors that they forgot or simply chose not to concern themselves with the truth.''

Cubs president Theo Epstein and Close stayed in touch throughout the offseason after Fowler turned down the Cubs' one-year, $15.8 million qualifying offer. But Fowler said another deal to his liking never came about with another team.

After an arduous free-agent process that left the 29-year-old Fowler unsigned until mid-February, Epstein and Close hatched the plot to surprise the team mid-workout.

"I was happy for Dex," Epstein said. "He deserves a great moment. We hatched a little plan and were able to pull it off."

To do that, Fowler had to ignore congratulatory texts from players like Anthony Rizzo, who also thought Fowler had signed with the Orioles.

"It's like walking back to the house and you haven't been home in like 10 years," he said.

Rizzosaid Thursday he was very surprised about Fowler's decision to re-sign with the Cubs and said teammates were thrilled to welcome him back with open arms.

"I told him a week or two ago if you sign with us and just show up and don't tell me I'm not going to have that," Rizzo said. "Obviously, that's what he did and no one knew.

"Ran into Theo yesterday and he said, 'Hey, I got a surprise for you guys.' But when someone says they have a surprise, you think elephant, giraffe; you don't know. That was the last thing on my mind," he added.

Fowler's decision to return was just as much of a shock to Cubs pitcher Jason Hammel.

"I had no idea," he said. "Joe said we were going to have a moment and I thought for sure he was bringing in some circus animal or some type of weird magician doing something."

The signing means Jason Heyward can move back to right field, where he's won three Gold Glove awards, while Jorge Soler and Kyle Schwarber will share time in left field. Heyward will likely play some in center as well.

"We feel great about our outfield mix," Epstein said. "It takes more than three guys to get through a championship season. It gives us a lot of impact depth."