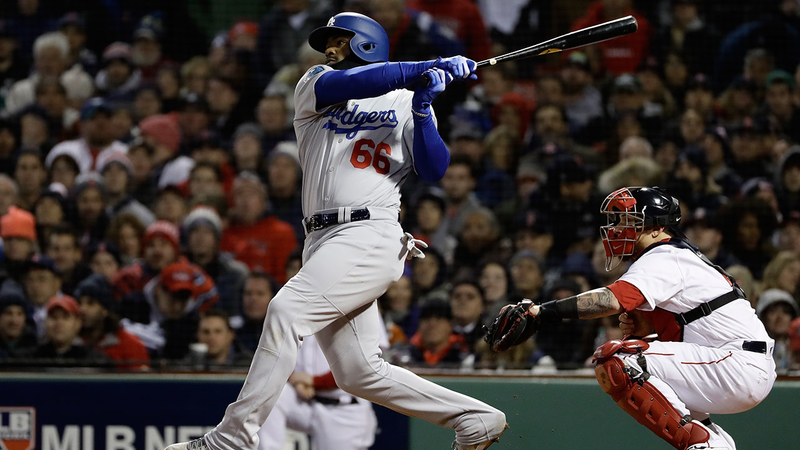 LOS ANGELES (KABC) -- The Dodgers trail the Boston Red Sox 2-0 in the World Series after losing Game 2 by a score of 4-2 Wednesday at Fenway Park.

The World Series now shifts to Dodger Stadium for at least the next two games. Game 3 is scheduled for Friday at 5:09 p.m.

Here are keys and matchups to Game 3.

STARTING PITCHERS
Rick Porcello will be the starting pitcher for the Red Sox in Game 3. Porcello had a 4.28 ERA in the regular season and has allowed five runs in 10 2/3 postseason innings.

The Dodgers will send 24-year-old rookie Walker Buehler to the mound. Buehler is making his World Series debut.

MATCHUPS
Boston scored nine of their 12 runs in the first two games with two outs, showing they can hit when the pressure is on. Dodgers' pitching will need to find a way to control Boston's offense.

They are 2 for 10 with runners in scoring position.

Los Angeles' offense has suffered from untimely hitting and will need to turn that around if it wants to salvage its season.

THINGS TO LOOK OUT FOR
The Red Sox have the opportunity to go up 3-0 in the series. No team has ever lost the World Series while leading 3-0.

The Red Sox are 17-for-40 (.425 average) with runners in scoring position and two outs this postseason. Boston looks to keep its bats hot heading to Dodger Stadium.

For the Dodgers to climb back in the series, the team will need to lock in offensively and start hitting Boston pitching.