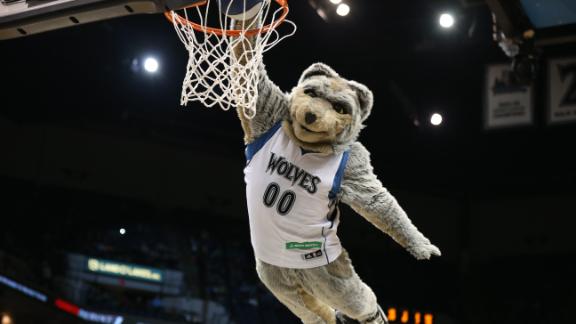 NEW YORK -- Julius Erving doesn't think the slam dunk contest is going away any time soon, but admits the competition has lost a step.

Not because LeBron James has stayed out of it or because every dunk has seemingly been done, but because of furry creatures.

"The mascots messed it up," Erving said, referring to the stunts pulled during regular-season games as part of crowd entertainment. "It was great seeing regular human beings, even though they were 6-foot-6, 250 pounds, running and dunking a basketball. When mascots started doing it with all the trampolines and all the crazy stuff and falling on the floor, then it became more like the X Games. The players can't live up to that."

Erving will be a judge in the 2015 Sprite Slam Dunk contest Saturday night at the Barclays Center in Brooklyn, but declined to reveal the changes to this year's competition. Last year, tweaks made to liven up the exhibition fell flat.

Dr. J, wearing an ABA All-Stars jacket made by Starter and being sold this weekend in partnership with retail partner Villa, laughs when people tells him they saw him win the first dunk contest, which was part of the 1976 ABA All-Star Game in Denver.

"It's probably the same number of people and the same people who say that they were at Wilt's 100 point game in Hershey, Pennsylvania," Erving said.

Erving, who is a consultant to the Philadelphia 76ers, admitted the team's futility is "unfamiliar territory."

But, being part in the process, he said he believes the rebuilding plan is real and rational.

"I bought into the plan, and in 2016 and 2017 they are going to be formidable," Erving said. "They're young -- younger from some college teams -- but I think they've proved that on any given night they can beat any team in the league."