Draymond Green won't change his style: 'I only know how to be Draymond' 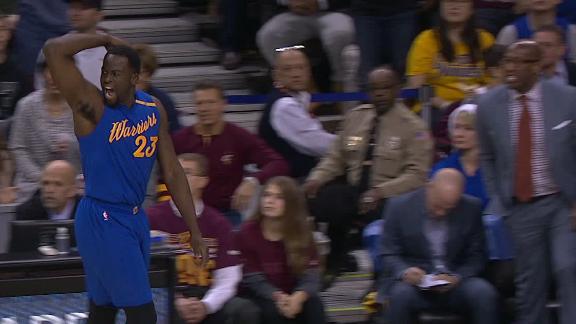 As technical foul calls against him mount, Draymond Green said it's up to the NBA and the referees "to figure it out." In the meantime, the emotional Golden State Warriors star said he's not going to change who he is.

Green, after getting another against the Cleveland Cavaliers on Sunday, leads the Warriors with seven technical fouls. Three of those have been for celebrating plays, but Sunday's offense was for expressing his displeasure for a foul call -- without saying anything to the referee -- while marching toward the bench.

As the technical fouls pile up, so do the ramifications for Green and the Warriors. NBA players automatically are suspended for one game once they reach 16 technicals in a season. After that, a player will be suspended for another game for every two additional technicals.

"I only know how to be Draymond. That's who I've been my entire life, that's who I'll continue to be. I won't be exhausted from acting when I get home. That ain't going to work for me. I won't change my approach for anything. There's no point."

"You've got to let him be him," Brown said. "If something happens from time to time, you live with it."

Said teammateKevin Durant: "I never was the one to try to rein a guy in for his passion for the game. He got a few techs for screaming, beating his chest, walking away fast. ... It's not on him sometimes, just more so on how the ref is feeling that night. You can't control that. We don't want to harness him, put a muzzle on what he does for our team, the energy he brings."

And that is what frustrates Green, who feels referees are just being inconsistent.

"I don't really have any answers for you," Green said. "Seems like stuff changes on the daily. I don't know. I can't judge it. You judge it one way and you think you got an understanding. Then the understanding you thought you had goes completely a different way the next time. Maybe they'll figure it out one day. It's not up to me."