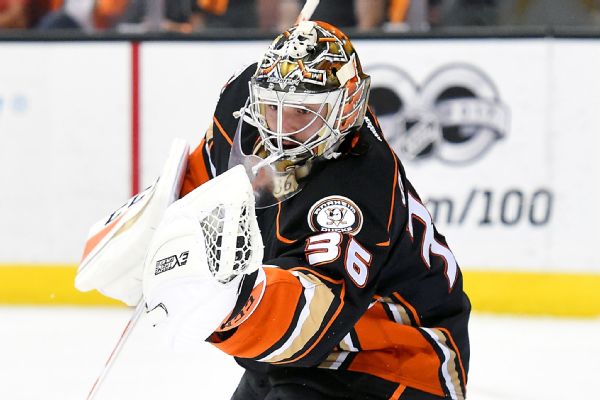 Anaheim Ducks goalie John Gibson said he should be ready for Game 6 after leaving Saturday night's 3-1 loss to Nashville with a lower-body injury.

Gibson, who was replaced by Jonathan Bernier during the first intermission, said he needs to be evaluated before Monday's game in Nashville.

The Ducks also were missing forward Rickard Rakell and right wing Patrick Eaves in Game 5, both due to lower-body injuries.

After the game, coach Randy Carlyle said both players are considered day-to-day.

Rakell had 33 goals and 18 assists in his breakthrough regular season, becoming the first player other than Corey Perry to lead the Ducks in goals since 2010.

The Swedish forward had seven goals and six assists in 15 postseason games, including a goal in the Ducks' overtime victory in Game 4 of the conference finals.

Anaheim also played its ninth consecutive game without Eaves, who scored a combined 32 goals this season for Dallas and the Ducks. He has been sidelined since April 30 due to a lower-body injury.

The Predators now hold a 3-2 advantage in the series.