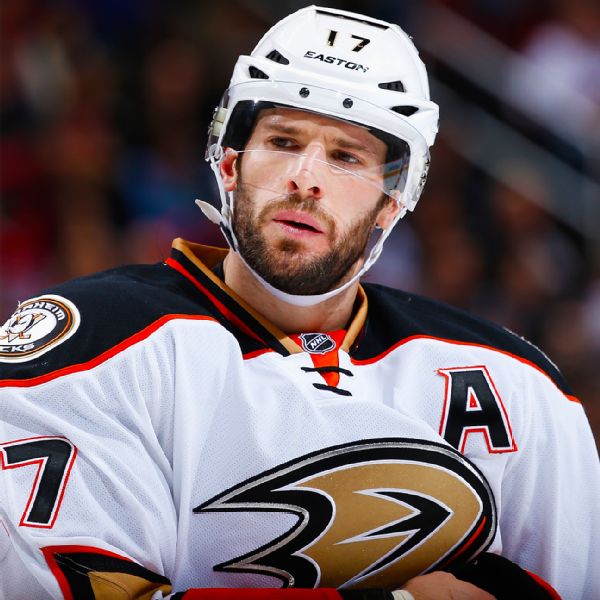 According to the team, the surgery is a "bone-preserving hip replacement that can provide pain relief and increase function in normal activities of daily living." The Ducks said the surgery leaves "open the possibility that Kesler could resume his NHL career following a lengthy recovery."

General manager Bob Murray said in a statement that the team would support any decision the 34-year-old Kesler makes on his future."At this point, Ryan needs to think about his life and family," Murray said.

Kesler underwent major hip surgery after the 2016-17 season and has struggled since. He was limited to 60 games last season -- in which he scored just five goals and three assists -- and 44 games in 2017-18. Last season, he became the seventh active U.S.-born player to reach the 1,000-career game mark.

"At this point in my career, this surgery was the best option for my quality of life," Kesler said in a statement. "The pain I was suffering has been greatly reduced since the procedure, and I'm grateful for that. While my playing future is unknown, I'm in a good place."

Kesler added that he looks "forward to spending more time with my family and doing everyday activities without pain."

Kesler, an alternate captain, carries a $6.875 million cap hit through the 2021-22 season. His contract includes a no-movement clause. The team can put him on Long Term Injury Reserve for the remainder of his contract.

The Ducks are coming off a difficult season, in which they fired longtime coach Randy Carlyle -- the winningest coach in franchise history -- and Murray took over as interim behind the bench. The Ducks have yet to name a new head coach.

Kesler, a Michigan native, was a part of the Ducks' "big three," which also includes captain Ryan Getzlaf (34 years old) and Corey Perry (33). Kesler joined the Ducks via a trade from the Vancouver Canucks in 2014.

Getzlaf and Perry helped the Ducks win the Stanley Cup in 2007 and have made three appearances in the Western Conference final (2006, 2007 and 2017). However, after a dismal season, the team is looking to retool -- making changes to become faster and younger. Getzlaf and Perry both have cap hits of over $8 million, both under contract through 2020-21, and both have no-movement clauses as well.
Report a correction or typo
Related topics:
sportsespnnhlryan kesleranaheim duckscorey perryryan getzlaf
Copyright © 2022 ESPN Internet Ventures. All rights reserved.
TOP STORIES
Heat prompts concern as Jurupa Valley brush fire chars 110 acres
Heat advisory in effect for most of SoCal until Monday night
3rd day of protests against abortion ruling scheduled in downtown LA
22 people were found dead in a South African tavern: police
Biden: G-7 to ban Russian gold in response to Ukraine war
CHP investigating possible 110 Freeway shooting in South LA
Solar patio umbrellas sold at Costco recalled after multiple fires
Show More
Hairless Chihuahua mix from Arizona named 'World's Ugliest Dog'
CO restaurant using 'robot server' to help staff amid worker shortage
The dream of owning a home is out of reach for 4 million Americans
West Covina police investigating after dead body found outside Vons
Ghislaine Maxwell on suicide watch but isn't suicidal, lawyer says
More TOP STORIES News