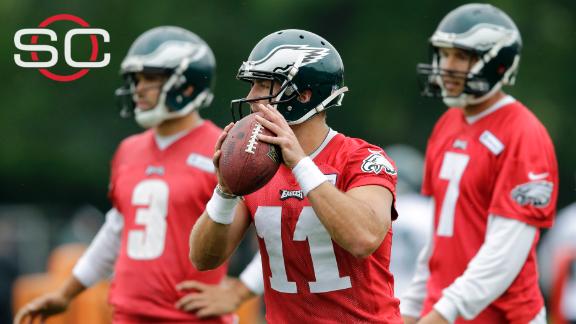 After being called out by Philadelphia Eagles center Jason Kelce for comments he made on a New York radio station Friday, New York Giants punter Steve Weatherford took to the Philadelphia airwaves Monday to do damage control.

In an appearance on WFAN in New York, Weatherford critiqued Chip Kelly's overhaul of his quarterback roster. Kelly traded for oft-injured Sam Bradford and signed Tim Tebow as a free agent.

"I'm the biggest Tim Tebow fan in the world," Weatherford told WFAN. "I mean, who wouldn't want their daughter to date a guy like that? I'll tell you what, I don't want him taking snaps for my team."

Meanwhile, Weatherford compared Bradford to a sports car and Mark Sanchez to a more reliable model.

"I'm going to give you a Ferrari that maybe won't be running all the time, or I'm giving you a nice Cadillac sedan," Weatherford said. "It's not the fastest, but you know what you're going to get out of it. Bradford can go zero to 60 in three seconds. But you don't know if he's going to start up some days."

When Weatherford was asked about the possibility of Bradford getting a contract extension, he went a step further.

"Good luck with that," Weatherford said. "Chip Kelly will get himself in serious trouble if they get an extension for that guy and he gets hurt? He's done."

"Of course a player who is literally not allowed to be touched is talking s---," Kelce wrote. "Is interviewing punters a thing now?"

A few minutes later, Weatherford appeared on 97.5 The Fanatic to explain.

"When you have a quarterback like Eli Manning, a two-time Super Bowl champion, I'm going to prefer that he take the snaps for my team than Tim Tebow," Weatherford said. "That's not a shot saying Tim is not good at quarterback. I think it's pretty factual that Eli Manning is better. I gave the guy the greatest compliment that you can ever give anyone, that you would let them date your daughter."

Weatherford called Bradford "incredibly talented" but said the quarterback's injury history has to be accounted for when discussing him. As for Sanchez, he called his former New York Jets teammate "rock solid," citing the two trips he made to the AFC Championship Game with the quarterback starting for the team.

The outspoken punter also clarified his comments on Kelly.

"I'm not saying your job is in trouble, but that is a guy you are expecting to be the future of your franchise, the same way it would be if you give a guy a long-term extension and then he ends up injured," he said. "It could happen to anybody. I'm not saying Chip Kelly's job security would be in trouble. I'm just saying if you invest that much money, that much cap space into a franchise quarterback and he's not on the field, then you're in trouble."

Weatherford said he was invited to appear on WFAN to promote an anti-animal cruelty organization.

"I do feel that a lot of things that I've said ... I don't want to say that they were taken out of context, but they were received not in the fashion that I wanted them to be received," Weatherford said. "I've got so much respect for the guys that play actual play football, it's unbelievable."

Weatherford criticizes Eagles quarterbacks
Ryen Russillo and Danny Kanell react to Giants punter Steve Weatherford's critical comments of Philadelphia's quarterbacks and whether a punter should be making these comments.