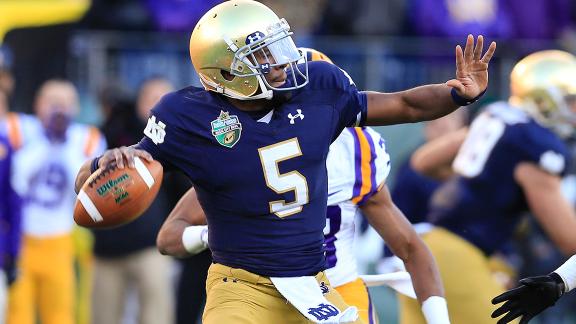 "After much thought and careful consideration, I will utilize my fifth year of eligibility to join the Florida State University Seminoles," Golson said in a statement Tuesday. "To Coach Jimbo Fisher, the Florida State football team, staff, alumni and fans, thank you for allowing me to become part of the Seminoles family.

"I can't wait to get started. Go Noles!"

Florida State announced in a tweet Tuesday afternoon that Golson has signed the required paperwork to make his transfer to the school complete.

Golson, who announced his intentions to leave Notre Dame on May 7, had visited Florida State, Florida and Georgia last week before returning to Notre Dame for graduation Sunday. He had given a list of 10 schools to Notre Dame's compliance office as potential places to play his final year, a source told ESPN's Brett McMurphy.

"This past weekend has been a defining moment in my life as I am proud to say I am a graduate of the University of Notre Dame," Golson said in the statement. "The support I've received there over the past four years has helped strengthen my integrity, wisdom and character. I would like to thank all of the coaches who spent time speaking with me these past few weeks and considered adding me to their football programs. Their interest and sincerity was truly humbling."

With the Seminoles, Golson is expected to compete for the starting job with Sean Maguire, who exited the spring as next in line to replace former Heisman Trophy winnerJameis Winston, the overall No. 1 pick in this year's NFLdraft.

Golson will be surrounded by talented players on offense, includingDalvin Cook, who ran for 1,008 yards as a freshman in 2014; and three receivers (Jesus Wilson, Travis Rudolph and Ermon Lane), who combined for 93 catches and nine touchdowns last season.

As a result, the Westgate SuperBook trimmed FSU's odds for winning the national championship from 30-1 to 15-1 last week in anticipation of Golson's decision.

Maguire started one game in place of the suspended Winston, completing 21 of 39 passes in last season's 23-17 overtime win over Clemson, throwing one touchdown pass and two interceptions.

"After meeting with Everett, I came away very impressed," Fisher said Tuesday. "He is extremely intelligent and a very personable young man. It's a pleasure for us to add him to our Seminole family. We look forward to getting him down here this summer to begin work on helping us continue to be one the nation's elite college football programs."

Maguire was inconsistent in the spring game, but was the clear-cut leader to replace Winston as FSU's starting quarterback.

Fisher said during last week's ACC spring meetings that he wasn't concerned about how the addition of Golson would impact the team's chemistry.

"You be honest and up front with everybody," Fisher said. "You have to communicate with everyone. We'll do what we think is best. We have to do what is best for the team to be successful."

Golson started two years for the Fighting Irish, a career highlighted by a 12-1 season in 2012 that ended in the BCS title game, where the Irish lost 42-14 to Alabama.

According to ESPN Stats & Information, Golson is the first quarterback since the BCS era began in 1998 to transfer after starting in a national championship game.

"If you're bringing [Golson] in, you're showing no confidence in your other quarterbacks," Bowden said.

"We never tell a guy he'll be the starter," Fisher said. "It's a competition no matter what. Let him earn his way through it."

Golson did not play during the 2013 season after he was suspended from Notre Dame for the fall semester because of what he deemed poor academic judgment. He returned to Notre Dame in the spring of 2014, leading the Irish to a 6-0 start and No. 5 ranking in the fall before suffering a 31-27 loss at Florida State, in which an offensive pass interference penalty wiped away Golson's potential go-ahead touchdown pass with 13 seconds left.

Notre Dame went on to finish 8-5 in 2014, with Golson tallying 22 turnovers over a nine-game stretch to end the regular season. Golson, who had eight fumbles last season, was replaced for the regular-season finale by Malik Zaire, who thenearned the starting job for the Franklin American Mortgage Music City Bowl against LSU, though both quarterbacks played in the Irish's 31-28 win.

Reports surfaced shortly afterward about Golson seeking options elsewhere after he split first-team reps with Zaire throughout this spring.

Golson finished his Notre Dame career with a 17-6 record as a starter, completing 59.5 percent of his passes for 5,850 yards with 41 touchdowns and 20 interceptions. He added 581 rushing yards and 14 rushing touchdowns.

David Purdum of ESPN.com and The Associated Press contributed to this report.