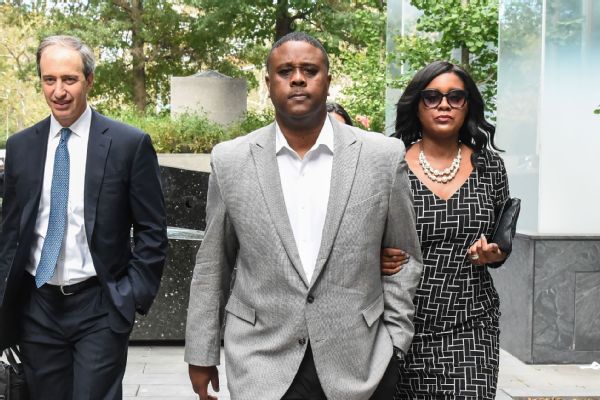 A U.S. District Court judge in New York will hear arguments Thursday morning about whether a federal criminal case against three of the 10 men indicted for their alleged roles in the FBI's two-year investigation into college basketball corruption should continue.

Attorneys representing former Adidas executives James Gatto and Merl Code and former sports agent Christian Dawkins are expected to argue in U.S. District Court for the Southern District of New York that what their clients are accused of doing -- allegedly funneling money from Adidas to the families of high-profile recruits to ensure that the players signed with Adidas-sponsored schools, and then Adidas and certain sports agents and financial planners once they turned pro -- doesn't constitute a federal crime.

Gatto, Code and Dawkins face one felony count each of wire fraud. Their attorneys will also challenge the government's argument that the victims in the case are the universities where the players signed, because the players certified that they were eligible to play when they weren't after they or their families accepted improper benefits.

U.S. District Court Judge Lewis A. Kaplan is expected to rule on the defendants' motion to dismiss the charges as early as Thursday. The trial is scheduled to begin Oct. 1.

Earlier this week, the U.S. Attorney's Office in New York dropped federal charges against Jonathan Brad Augustine, a former AAU director in Orlando, Florida, who was accused of conspiring with the others to persuade two high school players to sign with Louisvilleand one with Miami.

"It's not surprising to me that the case has issues because it should have never been brought," said New York-based attorney Jeffrey Einhorn, who represents former USC assistant Tony Bland in a separate federal case related to the FBI probe. "Everything about this case stinks."

Regardless what happens with the criminal cases, sources with knowledge of the FBI investigation told ESPN this week that the clandestine probe could result in potential NCAA violations for as many as three dozen Division I programs, based on information included in wiretap conversations from the defendants and financial records, emails and cell phone records seized from NBA agent Andy Miller. His office was raided on the same day the FBI arrested 10 men, including four assistant coaches, in late September.

"It's not the mid-major programs who were trying to buy players to get to the top," a source told ESPN. "It's the teams that are already there."

Miller, the president and founder of ASM Sports in New Jersey, relinquished his NBA agent certification in December. He represented NBA stars such as Kevin Garnett, Kristaps Porzingis, Kyle Lowry and Serge Ibaka.

The sources told ESPN that many of the alleged incidents involve illegal cash payments to prospects and their families, as well as players and their families receiving tens of thousands of dollars from agents while they were still playing in college. In some cases, according to the sources, NCAA head coaches were aware of the payments, while others didn't have knowledge of the schemes.

"At some point, the NCAA is going to see this stuff," the source said. "What are they going to do? They can't sit on their hands. If one kid is getting punished at USC for taking money, then the kid taking money at another school has to be punished, too."

Code, Dawkins and Gatto are accused of scheming to send $100,000 to the family of five-star prospect Brian Bowen to ensure that he would sign with Louisville last summer. The FBI alleges Bowen's father accepted the money; Bowen says he was unaware of the scheme.

Sources close to the investigation told ESPN that Augustine's charges were dismissed because evidence showed that he never gave the money he received from the defendants to a high school player they wanted to sign with Miami. Instead, Augustine kept the money for himself.

Attorneys for Gatto, Code and Dawkins have filed motions in an attempt to suppress wiretap interceptions made during the FBI's investigation. Among other issues, according to the attorneys, is that the U.S. Attorney's application for the wiretap was improper.

Earlier this month, the Wall Street Journal reported that one of the FBI undercover agents involved in the corruption probe is accused of using the government's money on gambling, food and drinks, and was taken off the assignment once his behavior was discovered.

"The things that are happening in this case don't happen in a federal case that's done properly," Einhorn said. "I'm not going to comment about the FBI agent, but what's next?"