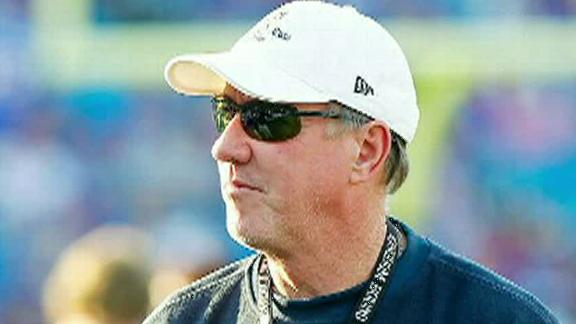 Former Buffalo Bills quarterback Jim Kelly, who left the hospital Friday for the weekend, said he and his family are "praying for a miracle" as he prepares to undergo chemotherapy and radiation treatments for oral cancer.

Kelly, who had been at Lenox Hill Hospital in New York City since last month, attended Friday night's New York Knicks game at Madison Square Garden and told the MSG Network that "I probably shouldn't even be here" but wanted to surprise his daughter, Erin, for making the dean's list.

When asked how he was feeling, Kelly told MSG "sometimes good; sometimes bad" and later told ESPNNewYork.com's Ohm Youngmisuk that "I am getting better."

The Hall of Fame quarterback will begin chemotherapy next week at Lenox Hill, and will have daily radiation treatments at North Shore-LIJ Cancer Institute on Long Island. The chemotherapy will be repeated as an outpatient in three weeks and six weeks.

"My big battle is Monday when I go in to start my radiation and chemo," Kelly told MSG. "I hope when it's all over they get everything, but right now we're praying for a miracle."

Doctors will wait two to three months following Kelly's chemotherapy and radiation treatments to determine if he needs surgery.

Kelly, who was diagnosed with a recurrence of cancer in his maxillary sinus and adjacent tissues last month, was appreciative of the support he has received.

"It's a humbling experience and it makes you feel good when so many people are out there praying for you," Kelly told ESPNNewYork.com. "... Even people that were my enemies before from other teams have rallied to my support. It just makes you feel good deep down in your heart.

"Just keep praying for me. I am going to need them."

Ohm Youngmisuk of ESPNNewYork.com contributed to this report.