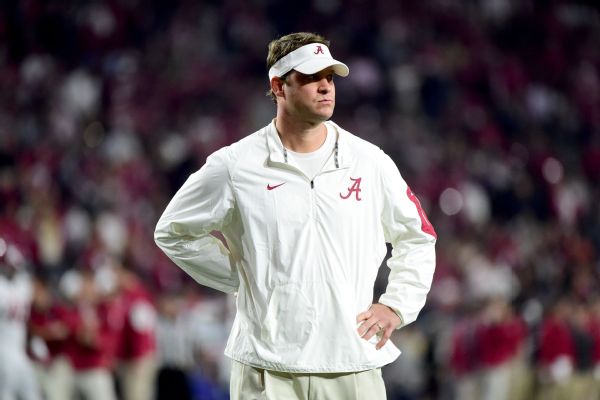 Kiffin and the Owls have had discussions, and Kiffin is weighing his options, sources told ESPN's Chris Low on Friday.

FAU's interest in Kiffin was first reported by Football Scoop.

Kiffin has been the offensivecoordinator at Alabama for three seasons, including 2016, helping the Crimson Tide win last season's national championship and get back to the College Football Playoff with the No. 1 ranking this year.

He has been frequently mentioned for other jobs, and the former USC, Tennessee andOakland Raidershead coach was believed to be a candidate for the now-filled head-coaching openings at Oregon and Houston in recent days.

Alabama coach Nick Saban recently acknowledged he wants to help Kiffin get a chance to lead a program again.

"The rest of it, we have not discussed, and I don't think it's the right time."

Landing Kiffin would be a major coup for FAU, which fired Charlie Partridge last month after going 3-9 in each of the last three seasons. The Owls haven't been to a bowl game since making back-to-back appearances under Howard Schnellenberger in 2007 and 2008.

Even being in the conversation with Kiffin means FAU is willing to make a serious salary upgrade. Partridge had two years left on what was a five-year, $2.7 million deal with FAU. Kiffin is making $1.4 million this season at Alabama.

He went to Alabama the following year and has been an annual fixture in coaching-opening whispers since.