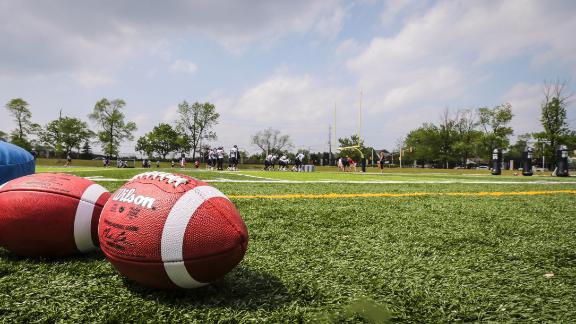 WADING RIVER, N.Y. -- The death of a 16-year-old varsity high school football player after an on-the-field collision during a game was "a freak accident," the school's superintendent said at a news conference Thursday.

Steven Cohen, the superintendent of Shoreham-Wading River School District on Long Island's North Shore, offered his sympathies to the family of Tom Cutinella, who played linebacker and guard and was in his junior year.

The athletic director will lead the district's investigation into Cutinella's death, Cohen said, looking at everything from the type of hit to what kind of helmets and equipment Cutinella and other players were using.

The medical examiner will determine the cause of death, although it appeared Cutinella suffered a head injury, officials said.

"Tom Cutinella was beloved by everyone who knew him," Cohen said in a statement he read at Thursday's news conference. "His death in a terrible sports accident yesterday has touched everyone in this community very deeply."

Assistant varsity coach Hans Wiederkehr, who coached Cutinella since he was 6 years old, described the team as a tight-knit group still struggling to understand what happened. He declined to recount the Wednesday night collision.

"Tommy loved to play football," he said. "He loved the game."

A member of Cutinella's family declined to comment, and school officials said the family had asked for privacy. A police car was parked outside the family's home in an upper-middle-class subdivision in Wading River.

Cutinella, who wore No. 54 for the Wildcats, was hit around 6 p.m. Wednesday night in the third quarter with Shoreham-Wading River leading 17-12 over John Glenn High School in Elwood, about 43 miles east of Manhattan. He was able to get up after the collision but then collapsed, officials said. An ambulance rushed him to Huntington Hospital, where he died in the intensive care unit after surgery. He had passed a preseason physical, Cohen said.

Principal Dan Holtzman says counselors have been made available to students. Hundreds of people gathered Thursday for a candlelight memorial for Cutinella on the football field -- and his uniform was placed on the scoreboard in lights, Newsday reported.

Students said the school was quiet throughout the day as people grieved. A group of about a dozen football players, mourning together off campus, declined to talk about their teammate.

Brian Dollard, a Shoreham-Wading River sophomore, said teary-eyed students were hugging and consoling one another in the high school's hallways and classrooms. He said Cutinella was known as a smart and kind student who volunteered in a peer-to-peer counseling group.

"He was one of the nicest kids in the school," Dollard said. "He was just always helping people."

Cohen said it hadn't yet been determined whether the season will be canceled in the wake of Cutinella's death. The executive director of the New York State Public High School Athletic Association didn't immediately return messages seeking comment.

An average of 12 high school and college football players die every year from football-related accidents, according to a recent study in the American Journal of Sports Medicine. Concerns about hard hits have grown in recent years, and concussion management has gained renewed attention for the roughly 1 million boys who play high school football.

According to AL.com, coach Brad McCoy said a neurologist told him that the player had ruptured an aneurysm in his brain. However, according to the report, the player's father, Demario Harris Sr., said in a Facebook post that the teen had suffered a brain hemorrhage caused by a hit in the game.

"He may have had a pre-existing condition, but there is no way to tell now," the post read, according to AL.com.

Linebacker Isaiah Langston of Rolesville High School in North Carolina died after collapsing during Friday's pregame warm-ups, family and the school district said Monday. Although he did not know the official cause of death, the player's brother Aijalon Langston told ABC 11 that it was related to a blood clot in the brain.